This is a very funny book, but not recommended for anyone who's likely to be upset by some light-hearted blasphemy!

In his later novels, Gore Vidal (who died in 2012, aged 86) was particularly interested in the possibilities of time travel for speculative fiction; changing the past. This book is a particularly spectacular example. Someone has been going back in time and interfering with the crucifixion! The narrator and hero, who is Timothy, St. Paul's young assistant, is visited by time travellers and tasked with sorting this out and then writing a true account of what happened, since all existing gospel texts have been hacked into and corrupted. Amongst other discoveries, he learns that Jesus was grotesquely overweight, which comes as a shock - though why shouldn't he have been very fat: there's no physical description of Jesus anywhere! But then the question emerges: is this the real Jesus?
Things get more and more complicated, but then the last pages bring the finest denoument I have ever come across in a novel. You think: of course! that's what's been happening! why didn't I spot it earlier! No reader should ever cheat and look at the last pages before reaching them!
Posted by Peter G. Shilston at 02:44 No comments:

George III came to the throne in 1760 at the age of 22; a well- intentioned but naïve and lonely young man, severely lacking in self-confidence. His dependence on the guidance of his tutor, Lord Bute, was such that he even allowed Bute to choose him a wife.
George confessed to Bute that he was passionately in love with Lady Sarah Lennox, the teenage daughter of the Duke of Richmond, and sought advice. Bute told him that it was wholly improper for a King of England to marry one of his own subjects (see footnote). It would also have had the unfortunate consequence of making the King the brother-in-law of Henry Fox, the most widely disliked figure on the political scene. So George instructed Bute to find him a wife, and Bute’s agents were sent to scour Europe for a suitable princess.
This was not an easy task. Any future Queen of England had to be a Protestant, and her country must not be allied with France, with whom England was currently fighting a war. Furthermore, there must be no hint of hereditary madness or any other complaint in her family. From the restricted field which resulted, the chosen candidate was the 16-year-old Charlotte of Mecklenburg-Strelitz; an obscure little principality in north-eastern Germany. Letters were duly exchanged, and Charlotte arrived in England to be married and crowned in September 1761.
It was only when she stepped off the boat that it was realized that there was a slight hitch. The poor girl was extremely plain. Legend has it that George winced when he first saw her. But he was a decent man, and so the marriage went ahead anyway. 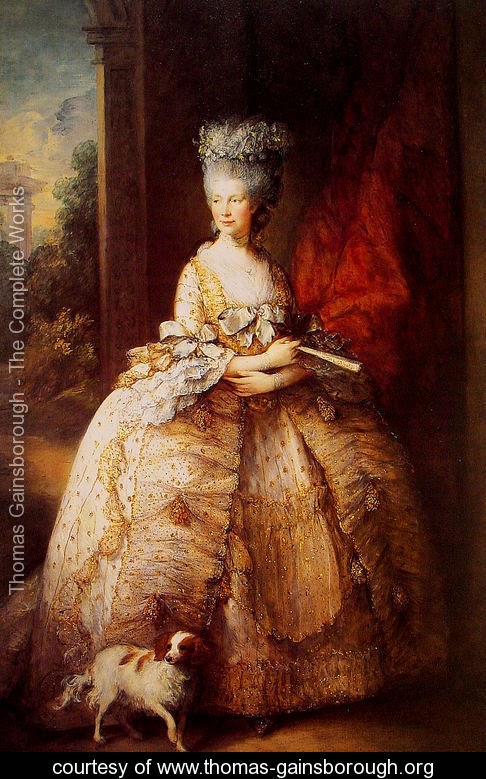 Not even the genius of Thomas Gainsborough could make Queen Charlotte look pretty, and thirty years later the cartoonist James Gillray depicted her as a grotesquely ugly old hag:- 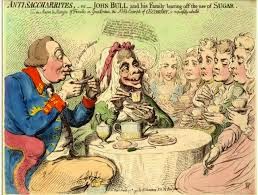 (Here King George and Queen Charlotte are shown joining the boycott of slave-grown sugar by drinking their tea without sugar. Charlotte stresses to her daughters that the most important aspect is how much money they will save by doing this! The princesses do not look convinced. George and Charlotte had a reputation for stinginess)

A few writers, attempting to be amateur psychiatrists, have attributed George’s “madness” to a mental breakdown, caused by a conflict between his passionate nature and his strong moral principles as he endeavoured to be remain faithful to an ugly wife. This is surely nonsense. The usual explanation for George’s illness is porphyria, an hereditary deficiency condition. He did not have his first serious attack till 1788, and he was only permanently incapacitated for the last ten years of his life.

George and Charlotte had 15 children, so they must have got on reasonably well. He is the only King of the Hanoverian dynasty to whom no sexual scandal is attached. All his sons, by contrast, turned out to be absolute rotters!

Footnote:
Bute had a point: no King of England or Prince of Wales had married one of his own subjects since Henry VIII in the early 16th century, and not many had done so before then. Prince Charles has been the first to do so since. It didn't do him much good!
Posted by Peter G. Shilston at 04:22 No comments:

I found this set in a bow window in the Castle Lodge, a Tudor building in Ludlow, alongside other pieces of German stained and painted glass:- 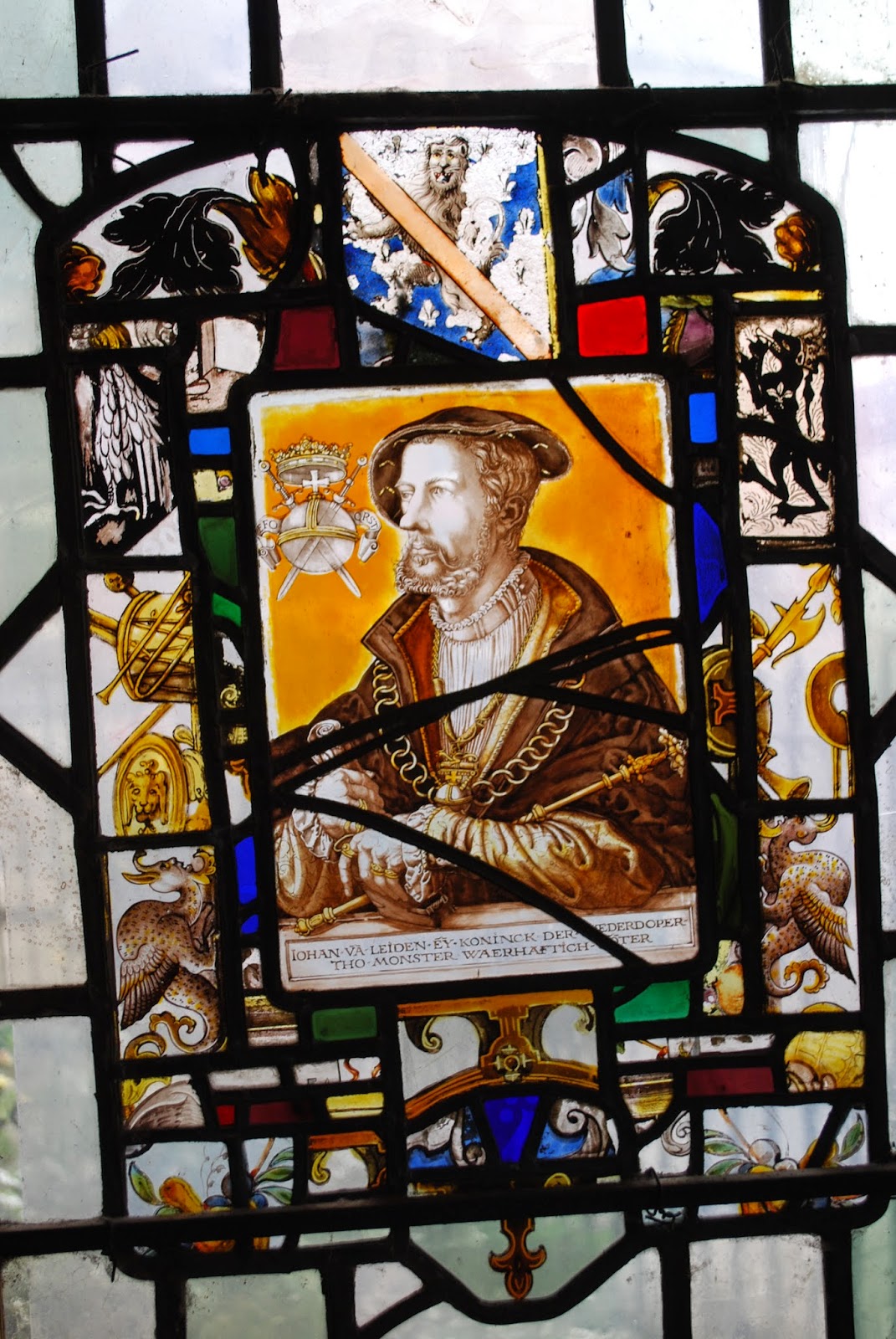 The person depicted is Jan of Leyden, an Anabaptist (that is, an extreme radical Protestant) who led a revolt which took over the city of Munster in western Germany in 1534-35. He proclaimed himself the successor to King David and looked to the imminent Second Coming of Christ. Eventually, after a siege, the Bishop of  Munster regained control of the city, and Jan and two other Anabaptist leaders were tortured with red-hot pincers and then executed, "to show", in the words of H.G.Wells, "that decency had returned to Munster". The cages in which the Anabaptist leaders were confined can still be seen at the city's cathedral.

Jan of Leyden became a legendary figure: a name of horror to Catholics and moderate Protestants for long afterwards. More than 60 years later Ben Jonson, in his play "The Alchemist", referred to two Puritan characters as "my little John Leydens".

What does this mean? And why is this piece of glass in Ludlow? I have yet to find answers to these questions. Any help would be appreciated!

Postscript: I tried consulting Pevsner's volume on the buildings of Shropshire, but found that it dismissed the Castle Lodge in a single line. It's clear that none of his researchers ever set foot in the place!
Posted by Peter G. Shilston at 01:49 2 comments:

For many years I took part in a "lads-and-dads" cricket team which played occasional matches in the evenings and at weekends. Some of the players were genuinely talented, others were not, and took part solely to make up the numbers. These, of course, are the ones I remember best.

We won a few matches; others we lost. Our most alarming moment came when we had a fixture at Keele University. We found the pitch occupied by a team of gigantic West Indians: one looked exactly like Clive Lloyd; another looked exactly like Charlie Griffith. They were hurling a ball around at 100 miles per hour and snatching it out of the air. They took one look at our motley crew and burst out laughing. "Oh, man, we're not playing you, are we?" they chortled in disbelief. It turned out they'd gone to the wrong pitch. We weren't half relieved. At the opposite level of ability, we once played against a team who did not possess the standard white kit. We never found out all their names, so our score-book contained entries like "Bowled Brown Trousers"

Aran, an Indian, impressed us at the start because he had an M.C.C. coaching certificate, but our favourable impression waned when we actually saw him play. For an enthusiastic sportsman, he was quite the slowest on his feet I have ever come across. Once when I was at the non-striker's end when he was batting, the ball eluded the wicket-keeper and I called him for a bye. He moved so slowly that fine leg had time to throw to the bowler's and and run him out. He was furious. "It is never the non-striker who calls for a run! It is always the striker!" he berated me, incorrectly. On another occasion he contrived to tread on his own hand whilst attempting a sweep shot and decided to retire hurt. He was scathing of the way I held the ball for bowling an off-break, telling me I'd never get it to turn. But the only time I saw him bowl was in a practice knock-around. Tony, who was a strong batsman, tended to dispatch anything on his pads into the trees; but when Aran bowled, Tony said the ball came through the air so slowly, and with so little rotation, that he could read the maker's name on it. Tony simply hadn't the heart to smash this bowling, and played every delivery with an exaggeratedly-correct forward defensive stroke. "Well, at least I kept him quiet!" said Aran afterwards.

My principle, when I was captain, was less to ensure a win than to make sure everyone who had volunteered to take part should get a chance to do something. Thus those who could bowl well might have to bat after the non-bowlers, and any volunteering would always be accepted. This sometimes led to odd results. Geoff had played very little recent cricket, but wanted to have a go at bowling. His first delivery, right-handed,was a wide. He then switched to the left hand: another wide. Finally he abandoned these attempts and said he would have to complete the over bowling underarm. Result: more wides! I don't think he played again.

Bill was no cricketer, but such an entertaining character when sober that it was always worthwhile picking him. He generally had difficulty in pushing up his batting average for the season to more than about 2. In one match he was told it was essential for him to defend his wicket as long as possible and not to bother about scoring runs. This suited Bill's unusual defensive procedure, which was to ignore any ball wide of the stumps; staying completely motionless at the crease and not even deigning to pick up his bat. He found this could be quite demoralizing for the bowler. On this occasion, Bill followed the instructions for some time, until eventually he received a ball which actually bounced twice before it reached him. Bill thought he was justified in having a swipe at it, and was duly caught. Once when Bill was bowling it occurred to him that the non-striker might have ventured out of his ground, and calculating there wasn't the time to turn and look, he held the ball behind his head and performed a back-dive into the stumps, driving them violently against the umpire's shins. Bill looked upwards amidst the wreckage with a smile on his face and enquired, "Oh, by the way, umpire: how's that?" First slip was so convulsed with laughter that he actually fell over. I used to have a photograph of Bill executing a square cut, which would not have been out of place in a coaching manual, so perfect was his position; but a spoilsport friend who also knew Bill asked whether there was any reason to believe that the bat had actually made contact with the ball. When I discussed this with Bill, he told me how he once overheard a conversation between two fielders while he was batting:- "He's only got one stroke". "He hasn't even got that!"

Most cricket is played at a much higher level than this, but we could hardly be bettered for entertainment value.
Posted by Peter G. Shilston at 02:32 No comments: