Everybody called him Sasha: he was never sure whether he had any other name. He could never remember a time when he had not been hungry or afraid. His earliest memories, which still resurfaced in his dreams, were of fighting: men shooting, buildings burning and bodies in the streets. He could barely picture his parents, who had both disappeared around that time. When the fighting had finished he was brought up by a woman who said she was his aunt, though she treated him more like a servant: setting him to chop firewood or shovel away snow, never giving him enough to eat and beating him if he complained. Eventually he ran away, and lived for a while by begging and stealing until he was big enough to get a job at Mr. Fenstein’s factory. He earned little there, for after years of malnutrition he was not strong enough for heavy tasks. His workmates jeered at him for his weakness and also because he could hardly read or write, and girls looked scornfully at his ragged clothes.
Then there was more fighting, and soldiers occupied the town. They spoke a strange language, but Sasha learned to pick it up; and when they found he was always willing to help them in return for food, they laughed and said he was a lad with promise. After a while they took him away for training.
The training was tough, and many of the duties very unpleasant, but Sasha never complained. Why should he? The barracks were far more comfortable than the doss-house which had been his home, and the food and clothing were the best he had ever enjoyed. For the first time in his life he was able to get washed and shaved properly, and have a decent haircut. Finally, when the training was completed, he was ordered to report to the railway station for transfer to his place of assignment.
As he dressed in his brand new uniform and looked at himself in the mirror, Sasha for the first time in his life felt a sense of pride. Now at last he had status: he was somebody! He walked through the streets and noticed that people who had once treated him with contempt now regarded him with wariness, even fear; and stepped off the pavement to make way for him. It made him want to smile, but he thought it best to keep his expression stern and hard. Now he was showing them! Now he could get his own back! And if Mr. Fenstein or anyone else failed to show him proper respect, he’d quickly demonstrate to them who was the boss now!
Sasha reached the station, where a train was drawn up. Much of it consisted of cattle trucks, but not for him! Oh no! He’d be travelling in a proper carriage with his new comrades, the other men of his unit!
It would probably be a long journey, because the destination painted on the train was somewhere he’d never heard of: Auschwitz.
Posted by Peter G. Shilston at 06:21 No comments:

David Lloyd George, the most famous of Welshmen, was actually born in Manchester in January 1863; the son of two schoolteachers. Eighteen months later his father died, leaving his widow pregnant, and with a baby son. Fortunately her brother, Richard Lloyd, came to the rescue, helping the family move to his home at Llanystumdwy, a village in north Wales.
Lloyd George later boasted that he was the first "cottage-raised man" to rise to the Premiership. This was strictly accurate, but Richard Lloyd was no downtrodden proletarian. He was a shoemaker (factory-made shoes had yet to appear), and as a skilled craftsman and a lay preacher in the Baptist chapel he was a respected member of the village community. He took great interest in his nephew's upbringing.
Despite the limitations of local educational opportunities, Lloyd George was able to qualify as a solicitor, and set up a law firm in partnership with his younger brother William. (It was named, rather oddly, "Lloyd George and George"). He was active in local politics whilst still a teenager, and rose to prominence by his campaigns for the rights of local Nonconformists against the power of the established Anglican church, to which hardly any of the villagers belonged. As a result he was adopted as Liberal Party candidate for the local constituency of Caernarfon Boroughs, and in March 1890, following the death of its Tory M.P., was elected to Parliament by a majority of just 18 votes. He was to represent the constituency through to when he was elevated to a peerage just weeks before his death in 1945.
There can hardly be a greater contrast between Lloyd George's background and that of Winston Churchill, his friend and colleague in the great reforming Liberal government before the First World War. Churchill was the grandson of the Duke of Marlborough, born in the splendour of Blenheim Palace and expensively educated at Harrow school; though he maintained he derived little benefit from it, and largely educated himself by extensive reading whilst a subaltern in the army in India. As an angry Conservative M.P. later remarked to Stanley Baldwin, the party's leader, "L.G. was born a cad and never forgot it: Winston was born a gentleman and never rememebered it".

Richard Lloyd's cottage can still be seen in Llanystumdwy. 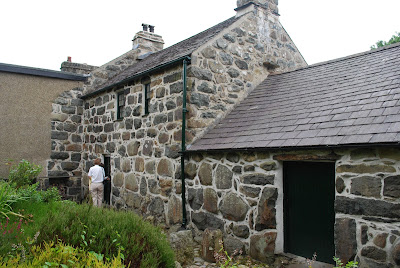 This is the back door. The shoemaker's workshop is on the right. Inside there was a kitchen and parlour downstairs and two bedrooms upstairs. As was usual in such cottages, there was no indoor lavatory; instead there was a privy at the end of the garden. 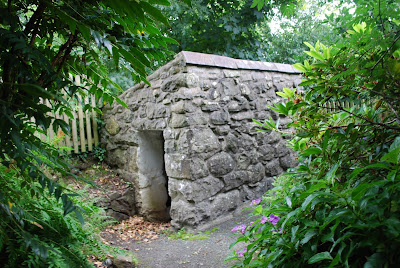 Inside, the cottage and workshop are maintained as they would have appeared. No photography is permitted inside, but instead there is an excellent Lloyd George museum in a modern building next door, which is well worth a visit.

King Edward I sumoned the third Parliament of his reign at Shrewsbury in the autumn of 1283. It was attended by a large number of lords, plus bishops, knights representing the shires of England and burgesses from the corporate towns. The reason for meeting there was because of Shropshire's proximity to the border with Wales. Edward's campaign to conquer Wales had led to the death of Prince Llewellyn ap Gruffudd the previous year, and then in June Llewellyn's younger brother Dafydd, after a career devoted to changing sides, had finally been captured near Llanberis, at the foot of Snowdon, in June. Edward was determined to make an example of him, and the Parliament was accordingly summoned to witness Dafydd's trial and execution.
The verdict was inevitable. Dafydd was found guilty of treason, and sentenced to be dragged at a horse's tail through Shrewsbury, hanged, cut down whilst still conscious, disembowelled, and his body cut into quarters and fed to the dogs. Such a savage and degrading punishment had never before been visited on someone of such high rank: as the chroniclers noted, with a touch of unease, it was "in previous times unknown".

A few days after disposing of Dafydd, King and Parliament decamped to the home of Edward's Chancellor, the Bishop of Bath and Wells, Robert Burnell, in a village a few miles outside Shrewsbury, which is still called Acton Burnell. Victorian constitutional historians believed that this was the first occasion when the Lords and Commons met separately, with the knights of the shires taking the momentous decision to place themselves alongside the town burgesses in the Commons; but there seems to be no certainty about this.
Burnell, a career cleric, had been a member of Edward's household since the 1250s, and was now one of his most trusted advisors. Amongst other things,he drew up the Statute of Westminster, regulating how future Parliaments should be conducted. Edward tried several times to have him made Archbishop of Canterbury, only to have the appointment vetoed by the Pope, who, justifiably, objected to Burnell's immoral personal life (he had fathered five illegitimate children!) and the way he had accumulated vast personal wealth by blatant simony. He died in 1293.

These are some pictures of the surviving mediaeval buildings at Acton Burnell. In 1284 Bishop Burnell was given a "licence to crenellate" his house; that is, to build battlements; but it isn't really a castle. (In this way it is comparable with the contemporary Shropshire "castle" at Stokesay, which was built by another of Edward's friends: the wool-merchant Lawrence of Ludlow). What Burnell built for himself was a refined and sophisticated mansion, whose very lack of defensibility showed how the country was becoming more peaceful. 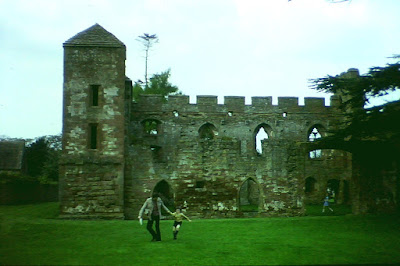 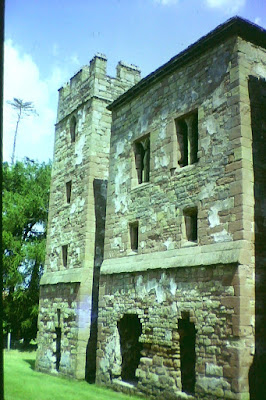 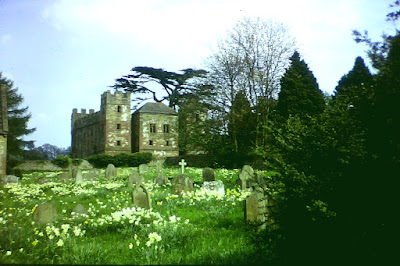 Nearby is the church of St. Mary, built at the same time; but little remains of the large stone barn where the Parliament is supposed to have met.

The Great Orme Copper Mine, Llandudno 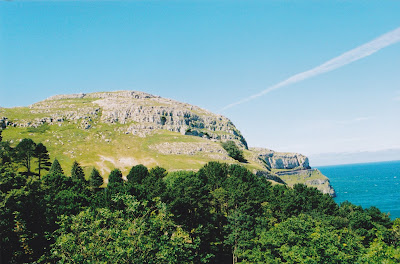 The Great Orme is a massive lump of limestone rock overlooking the seaside resort of Llandudno in north Wales. Copper ore, greenish in colour, seems to have been excavated from the site as long as 4,000 years ago, presumably in the first instance where the veins of ore outcropped on the surface. Later a vast quantity of waste rock covered the site, and it was only when this was removed after 1987 that a network of Bronze Age tunnels and caverns was discovered. These extend over five miles and reach a depth of  250 feet, but it is guessed that what has been excavated so far is only a small part of what is down there.
The Bronze Age miners has no excavating tools other than picks of deer antler and shovels of the shoulder-blades of oxen. Some of the tunnels are so narrow that they must have been worked by small children. Working conditions, with no more light than that from little lamps of animal fat, can hardly be imagined. As veins became exhausted, the tunnels leading to them were filled with waste rock, which is now being painstakingly removed, so that some of the tunnels are now open to visitors.
This is the entrance, on the right, with the exit just to the left of it:- 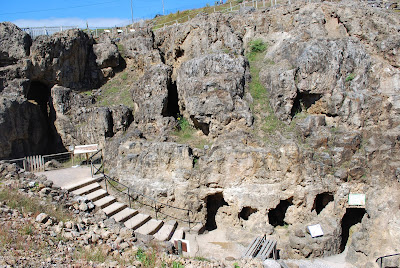 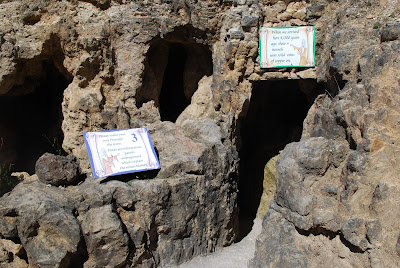 A tour of the tunnels is a most interesting experience, but cannot be recommended to the very tall, the obese or the claustrophobic! 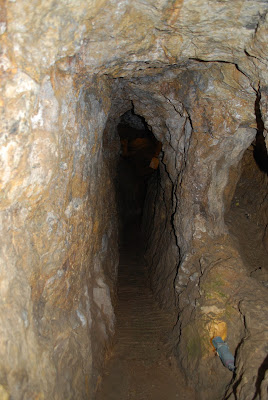 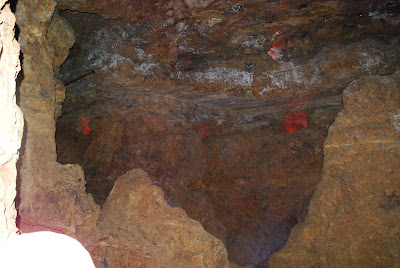 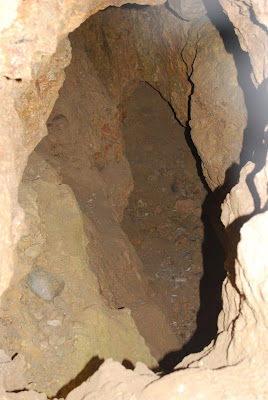 How these early peoples first discovered how to smelt copper from the ore, and to alloy it with tin (which is quite a rare metal) to make bronze; and whether these developments spread out from a central source or were discovered independently in different parts of the world, remains a mystery to archaeologists.