Hitler was appointed Chancellor of Germany in January 1933, but it took him 18 months to establish a single-party dictatorship. Meanwhile the leaders of Europe looked on tensely. Anyone who had read "Mein Kampf" or listened to his speeches knew that Hitler was a man given to violent words; but what foreign policy actions would he attempt now that he was in charge?
Mussolini for one was not overimpressed. He had seized power in Italy a decade earlier and considered himself to be very much the senior figure in the Fascist hierarchy: indeed at the time of his Beer Hall putsch in 1924 Hitler had been little more than a carbon-copy Mussolini, and an unsuccessful one to boot. When the two dictators met for the first time at Venice in June 1934, Mussolini told his friends, "This fellow Hitler's wrong in the head!", and instructed his soldiers to parade before the German fuhrer unshaven and in unpressed uniforms, to indicate his contempt.
Between Germany and Italy lay the small state of Austria. In February 1934 Chancellor Dollfuss, guided by Mussolini, had destroyed the Socialist party and established a dictatorship. Then on July 25th Dolluss was murdered by a group of Viennese Nazis. It is most unlikely that the murder had been ordered by Berlin, but the intention of the killers was certainly an Anschluss: union between Austria and Germany. But Mussolini far preferred a small buffer-state between himself and Germany, and furthermore he had his own fears for Italy about such talk; for at Versailles Italy had been given the Trento, between Lake Garda and the Brenner pass, which was inhabited mostly by ethnic Germans. So he moved his troops up to the Austrian frontier, and Hitler was obliged to stand by passively while in Vienna Schuschnigg, Dollfuss's successor, restored order.
So after two years in power, Hitler's only international success was an entirely legal and peaceful one, when in January 1935 the Saar held a referendum on its future (as was decreed by the Treaty of Versailles) and voted overwhelmingly to return to Germany.

The Western leaders,especially the French, deduced from this that Mussolini could be a useful check to Hitler's ambitions. And although Hitler made no aggressive moves in foreign policy, his words continued to be unsettling, he continued to rearm Germany, and in March 1935 he announced the start of military conscription; a clear breach of the terms of the Versailles Treaty. In consequence a great international conference was held at Stresa in April, hosted by Mussolini and attended by the leading statesmen of France and Britain. The document which emerged, the "Stresa Front", committed the three powers to resist any attempt to change European frontiers by force. At the same time, France signed a pact with the Soviet Union. Hitler appeared encircled and, with luck, tamed. But Mussolini decided to have a war.

Mussolini had no economic reason for starting a war. Italy already had an empire, in Libya, which was run at great cost and at no economic gain (oil had been discovered there, but Mussolini made no attempt to exploit it). Any rational calculation would have shown that Italy was simply not strong or rich enough to be a Great Power: she could follow Germany, or the Anglo-French entente, but could not stand on its own. In the First World War, she had chosen the latter option. But Mussolini, who had the soul of a tabloid journalist, was annoyed at Hitler increasingly supplanting him in the headlines, and wanted to grab some of the attention. Also, he approved of violence per se;  he regretted that the Italian people showed little enthusiasm for war, and was determined to remedy it. At the Stresa meeting he was given the impression that France, and perhaps Britain as well, might turn a blind eye to any adventures he undertook in East Africa.

Abyssinia (now Ethiopia) was Mussolini's target. The country was the only independent state in Africa. It was ruled by its Emperor, Haile Selassie, and was a member of the League of Nations. Before the First World War the Italians had gained two adjactent coastal territories, Eritrea and Somaliland, but an attempt to conquer the country had been disastrously defeated at the battle of Adowa in 1896. There was thus a national humiliation to be avenged. 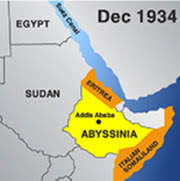 Well before Mussolini embarked on his invasion of Abyssinia, it must have been obvious to all that something aggressive was being planned. Preparations had begun as early as 1932, and the buildup in armaments passing through the Suez canal could not be concealed. In December 1934 a clash over a disputed frontier at Wal Wal, an oasis in the middle of nowhere, provided a pretext for war. In June 1935 Anthony Eden, then a junior Foreign Office minister, went to Rome to try and sort out the looming problem. In order to keep Italy onside against Hitler, Britain offered to support territorial concessions in Abyssinia, but there must be no invasion. Mussolini rejected the offer: he wanted a victorious war, not mere adjustment of frontiers. The British position was complicated at this stage by a government reshuffle that introduced Sir Samuel Hoare as Foreign Secretary. Then in October the Italian invasion began.
This was a test for the League of Nations. A few years earlier, the League had failed to act when the Japanese invaded Manchuria. Hoare now demanded action, and the League duly imposed sanctions on Italy. But these were unlikely to be effective, at least in the short term. Two of the world's strongest economic powers, the United States and Germany, were not members of the League. The U.S.A. refused to get involved at all, and Hitler was of course delighted to see a breach in the Stresa Front. British Foreign Office expertise was divided between those who wanted a strong response and those who feared driving Mussolini into the arms of Hitler. Many old Conservatives had always admired Mussolini; Churchill himself being one of their number. There were also strategic considerations: in the First World War, both Italy and Japan had supported theAnglo-French entente; but what if both these powers were hostile in a future conflict with Germany? As it was, the sanctions imposed did not include oil, nor was the Suez Canal closed to Italian shipping.
Probably the hope was that Mussolini would get bogged down in an Abyssinian war which dragged on for years. But, with the use of aerial bombing and poison gas against weakly-armed native forces, the Italian armies swept deep into the country. The British Foreign Office devised a plan to end the war: part of Abyssinia would be given to Italy, with Haile Selasse left ruling a rump state with access to the sea through British Somaliland. Hoare took the plan to Paris in December 1935, where the French Foreign Minister Pierre Laval welcomed it, and Mussolini seemed prepared to accept it.
But then something unexpected happened. Somehow the plan was leaked to the press, and provoked a chorus of popular outrage in Britain. The Prime Minister, Stanley Baldwin,was forced to repudiate it, Hoare resigned and was replaced by Eden. But the British government was not prepared to risk any tightening of sanctins or military action. The invasion continued, and in May 1936 Haile Selassie fled and Mussolini proclaimed his sovereign, King Victor Emmanuel III, Emperor of Abyssinia.  Haile Selassie gave a dignified address to the League of Nations at Geneva, where the Italian delegates attempted to howl him down.
Mussolini's propaganda argued that he was bringing civilization to a primitive country where slavery was still practised; being supported in this by the likes of Evelyn Waugh. He also pointed out, with justice, that Britain and France had conquered huge empires in Africa less than a century earlier, so their criticism was sheer hypocrisy. It could be argued that Mussolini was guilty of no more than anachronism; but anachronism is a serious offence. The age of empre-building had passed.


The result of the debacle was, for Britain and France, the worst of all possible worlds. The League of Nations was now entirely discredited as a force for peace, and was henceforth an irrelevance. The big winner was, of course, Hitler. He was delighted at the rift between Italy and the Anglo-French entente, and was convinced of the weakness of his enemies. In March 1936 he took the enormous gamble of reoccupying the Rhineland with his army, a clear and threatening breach of the Treaty of Versailles, in the expectation that he would face no military response. His generals were very nervous, but he was proved right. As Mussolini increasingly fell into his pocket, he was emboldened to take greater and greater risks. The countdown to the Second World War had begun.

Osborne House; the Isle of Wight,

When Queen Victoria and her husband, Prince Albert, were looking for a private country home for their growing family, they found Osborne house on the Isle of Wight. The Queen already knew the island, and the growing railway network meant that it could be easily reached from London.
Osborne is situated near the north-east coast of the island, between Cowes and Ryde. It was then a three-storied brick and stone house, built in the late 18th century. Victoria and Albert visited the house in 1844 were delighted with its setting. Victoria bought the estate from her Privy Purse for £28,000, and Albert threw himself into rebuilding the house in Italian style and extending the estate by purchasing neighbouring farms. Every year the family spent as much time as possible.
The result of Albert's labours is a magnificent spectacle. 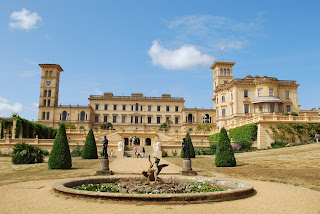 The terrace is laid out in formal Italian style. 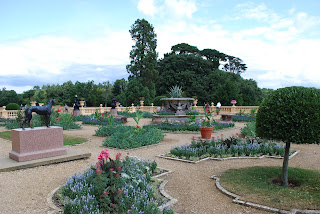 It looks out north-east, down a broad walk to the sea, with Portsmouth visible on the far side of the Solent. 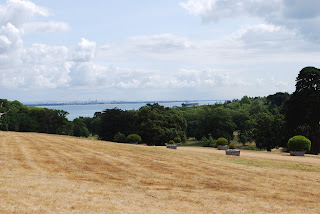 Inside, the house has been restored and repainted much as it was. The widowed Queen preserved Albert's dressing and writing room absolutely unchanged; even to the extent of having hot water brought there every morning! But Albert's collection of Italian Renaissance art is now in the National Gallery and other museums, and most of the paintings on display are of the 19th century. I was particularly amused by this vast allegorical fresco on the main staircase: "Neptune Resigning the Empire of the Seas to Britannia" 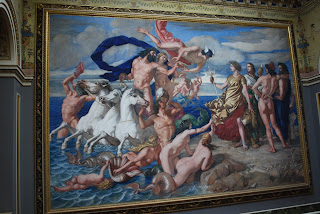 Facing it is a near-lifesize statue of Albert as a classical warrior: a birthday present from the Queen. 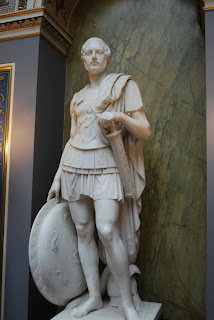 Some distance away in the grounds is the Swiss Cottage, which Albert built for the royal children in 1854. 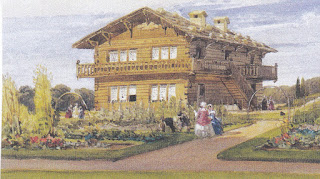 Here they were given garden-plots to grow flowers, fruit and vegetables with their own hands. There are also miniature fortifications, where Bertie (the future King Edward VII) could play at soldiers. Nowadays the house is a museum, housing the family's collections of natural history and of fascinating folk-art from all over the Empire.


After Albert's premature death in 1861 Victoria and her children continued to spend much of their time at Osborne. The Queen spent many years in virtual seclusion, where her closest confidant appeared to be her Scottish ghillie, John Brown. Towards the end of her life she became fascinated with all things Indian: she retained two Indian personal servants, and the Durbar wing was built in the 1890s.
The Durbar Room has a ceiling of moulded plaster, cast from moulds constructed by an Indian craftsman, Bhai Ram Singh, under the direction of Lockwood Kipling, the father of Rudyard. Ram Singh also designed the doorknobs and the chairs. 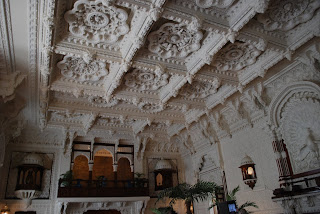 The corridor to the Durbar Room features portraits of Indian princes and ladies in full regalia.


Queen Victoria died at Osborne in January 1901. In anticipation of her death, many of her family had assembled there, including her grandson, the Kaiser William II of Germany. But the new King, Edward VII, had no use for the house, and it was used as a convalescent home for army officers. In 1954 it was opened to the public, and in 1986 was taken over and run by English Heritage (from whose excellent guidebook most of this information has been taken).