The logically-minded men of the French Revolution devised decimal systems of weights and measures and of currency, so why not a decimal calendar too? This project was entrusted to a group of mathematicians, scientists and a couple of poets by the Committee of Public Safety in late 1792, and next autumn the group’s proposals were implemented.
The new era was proclaimed to have begun on September 22nd 1792, when France became a republic: the start of Year One of the new calendar. Much propaganda was made of the coincidence with the autumn equinox: all Frenchmen became equal at the same time as day and night were equal!
The year was to be made up of 12 months (even they couldn’t escape from this magic number!) each of 30 days. There were to be 5 extra days, “Festival days” outside the normal months, with a sixth added in leap years (the first of these being in Year III). To replace the weeks, each month was to have 3 decades of 10 days each; with a day divided into 100 minutes, and a minute into 100 seconds. There would thus be 100,000 seconds in a day, instead of 86,400 under the old system. Watchmakers were ordered to start making new watches for these new arrangements, and many of these survive.
The new days were prosaically named 1st, 2nd, etc, but the festival days were all given their own individual names, and a not-very-successful poet, Philippe Fabre d’Eglantine, was given the job of devising names for the new months. He decided to name them after climatic and agricultural themes (starting on September 22nd):-
Vendemiaire, Brumaire, Frimaire, Niviose, Pluvoise, Ventose, Germinal, Floreal, Prairial, Messidor, Thermidor, Fructior.
meaning, roughly:-
Vine-harvest, Foggy, Frosty, Snowy, Rainy, Windy, Budding, Flowers,
Meadow-grass, Reaping, Hot, Fruit.
Fabre’s names won official acceptance, but he did not enjoy his success for long. He was a close friend of the radical leader Danton, and when Danton’s group was purged by Robespierre in spring 1794, Fabre followed his leader to the guillotine.
The revolutionary calendar lasted a little longer. Napoleon Bonaparte staged a military coup in Brumaire 1799. In 1804 he crowned himself Emperor and sought a reconciliation with the Catholic Church, as a result of which Sunday was restored as a day of rest and the Gregorian calendar reinstated on January 1st 1806. There have been no serious attempts to reform the calendar since then. Even suggestions to set a fixed date for Easter have invariably failed!

This is the Castel Sant' Angelo, on the west bank of the Tiber in Rome. The scaffolding on top surrounds a statue of the Archangel Michael. 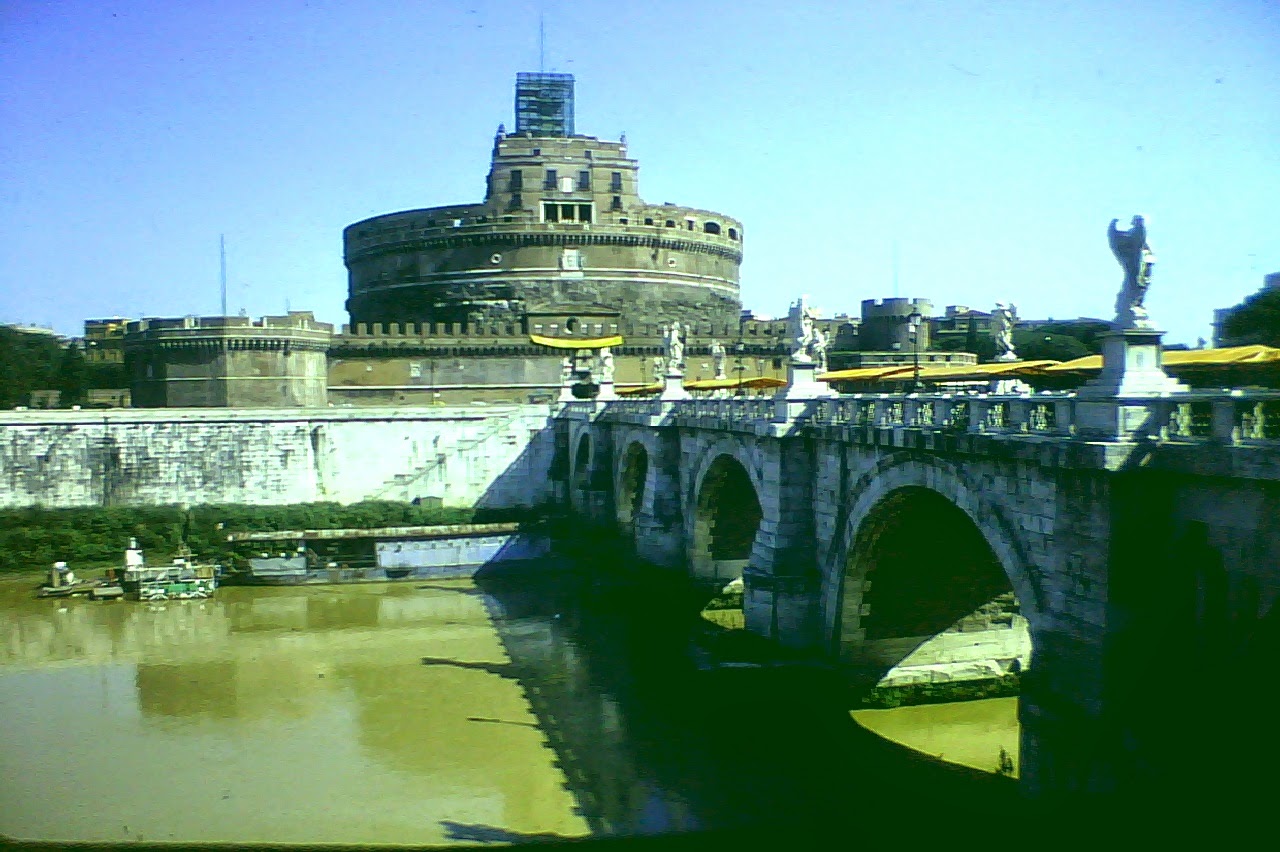 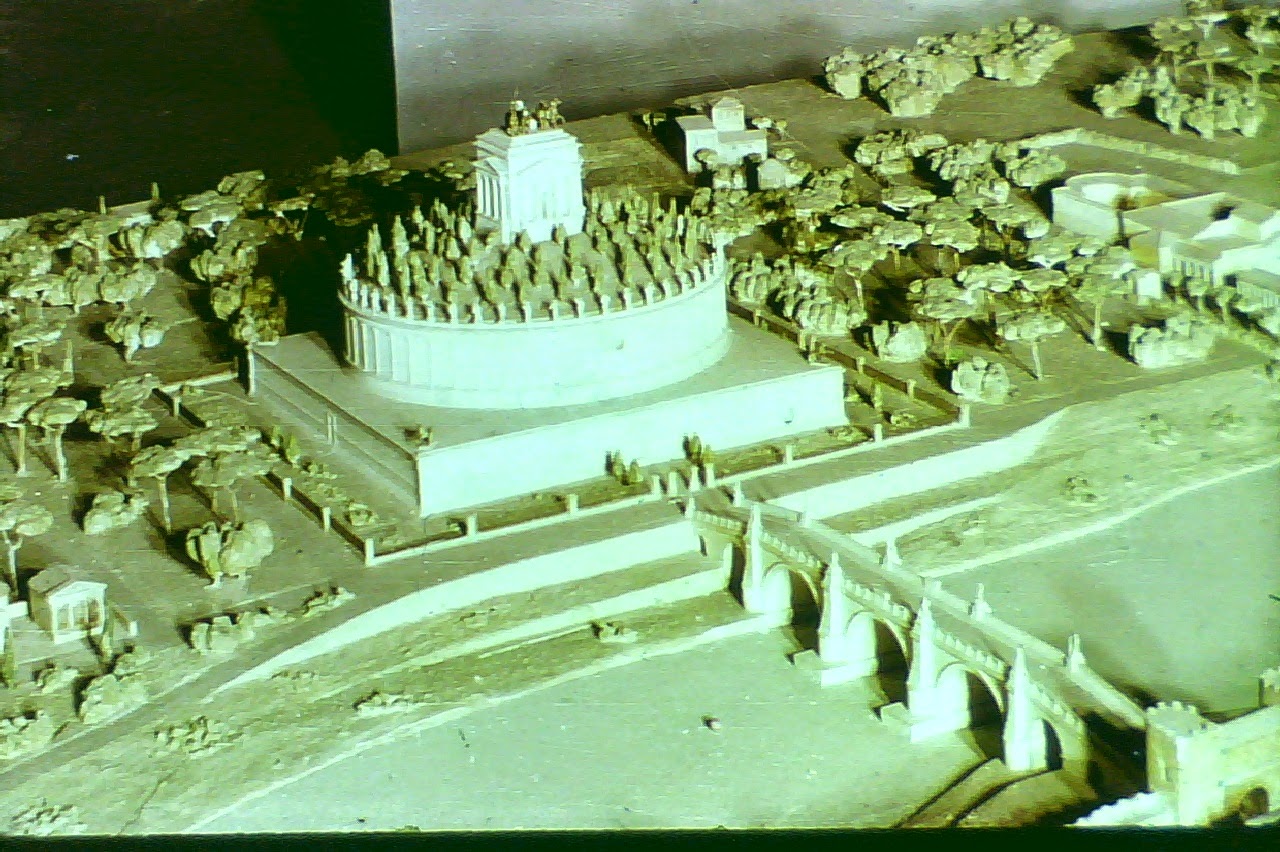 It was rebuilt and adapted to become the fortress and dungeon of the Renaissance Popes. The interior is very lavishly decorated: note the papal coat of arms in the ceiling! 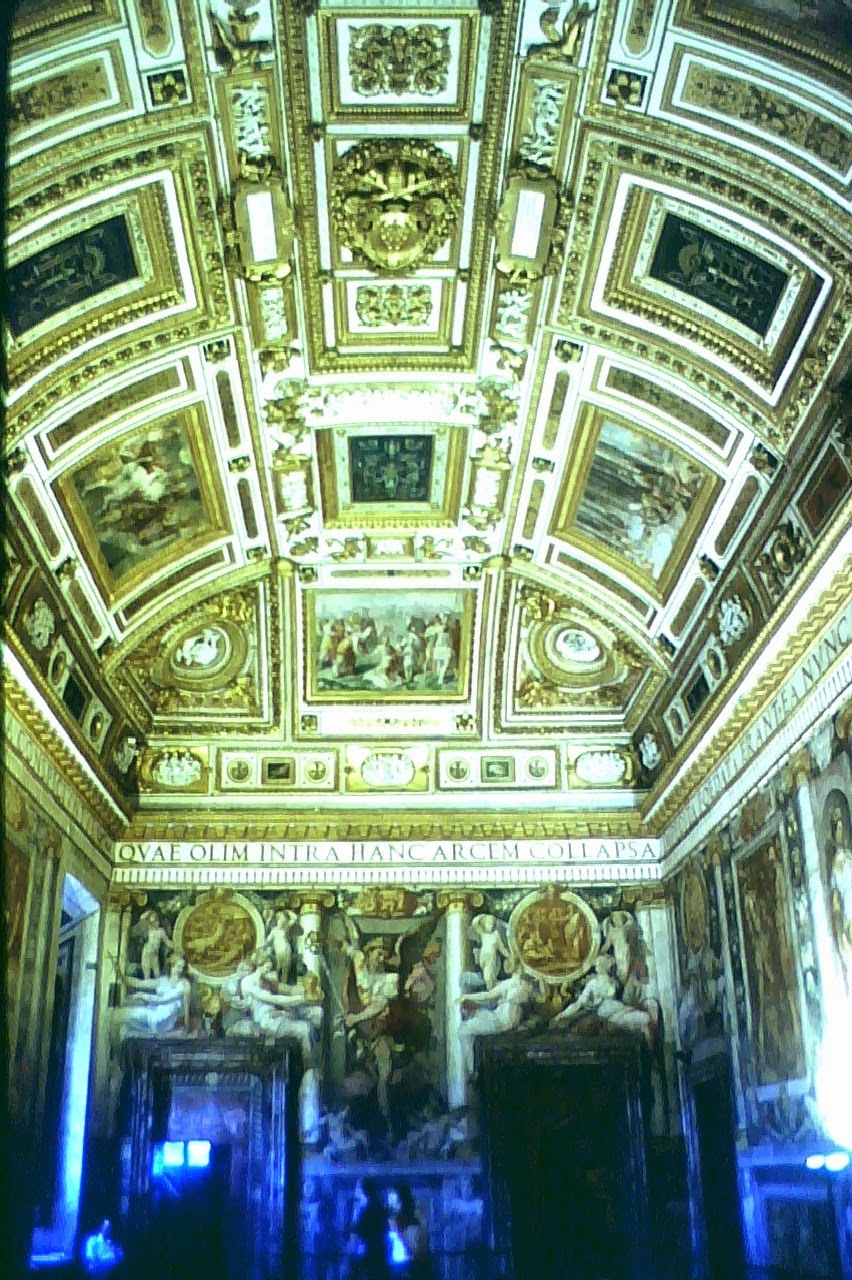 From the battlements there is a magnificent view of St. Peter's. The Vatican palace is to the right of the cathedral 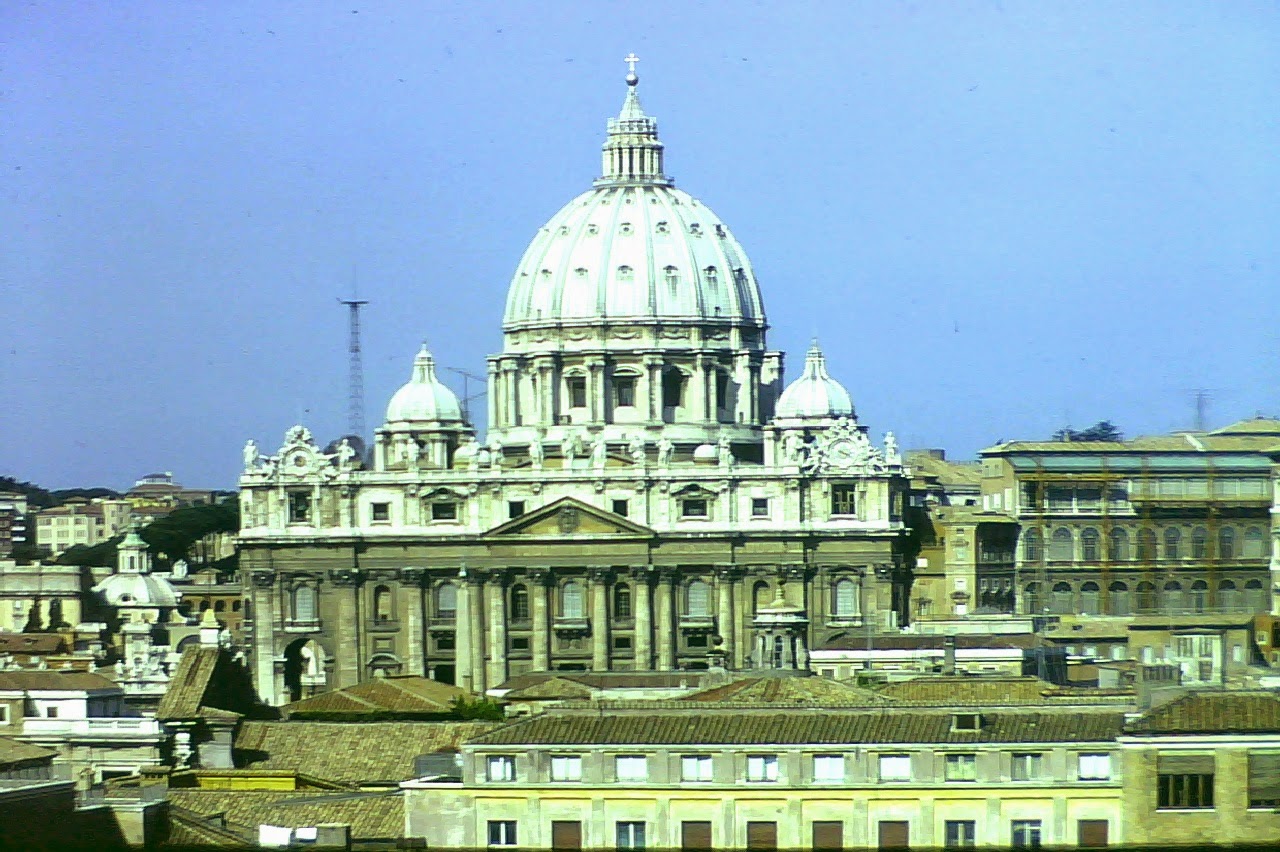 Just off to the right of the previous picture is a fortified wall. 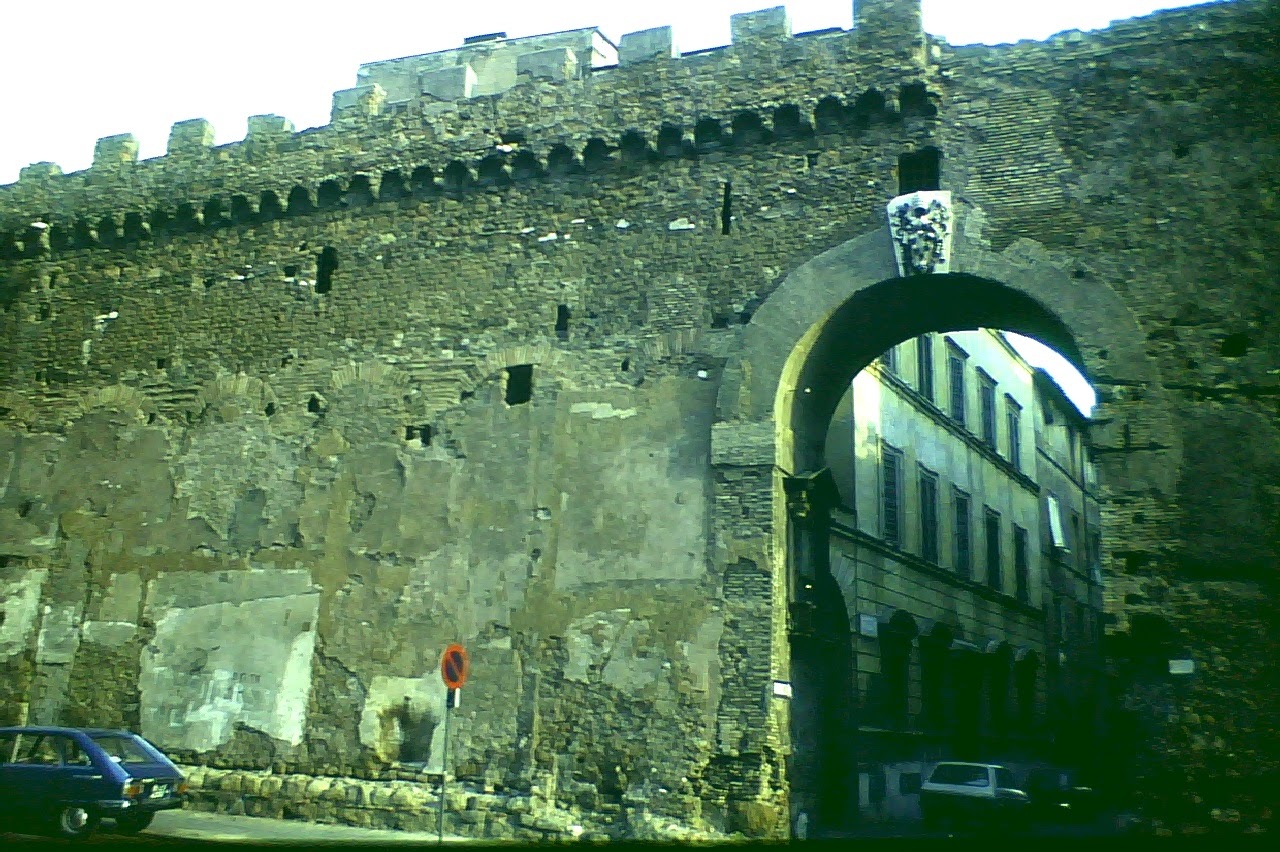 It was along here that Pope Clement VII had to flee for his life when in 1527 the Emperor's armies, who had recently defeated the French in northern Italy and were infuriated by the Pope's double-dealing in the war, stormed into the city. He took refuge in the Castel Sant' Angelo, and had to watch as the invading soldiers (who included many German Protestants) ransacked Rome in an orgy of slaughter and destruction.
The defence of the Castel Sant' Angelo was organised and led by the great goldsmith Benvenuto Cellini, or so he tells us in his memoirs. Of course, St. Peter's at the time would have looked nothing like it does today: in 1527 it was no more than a building site.
. 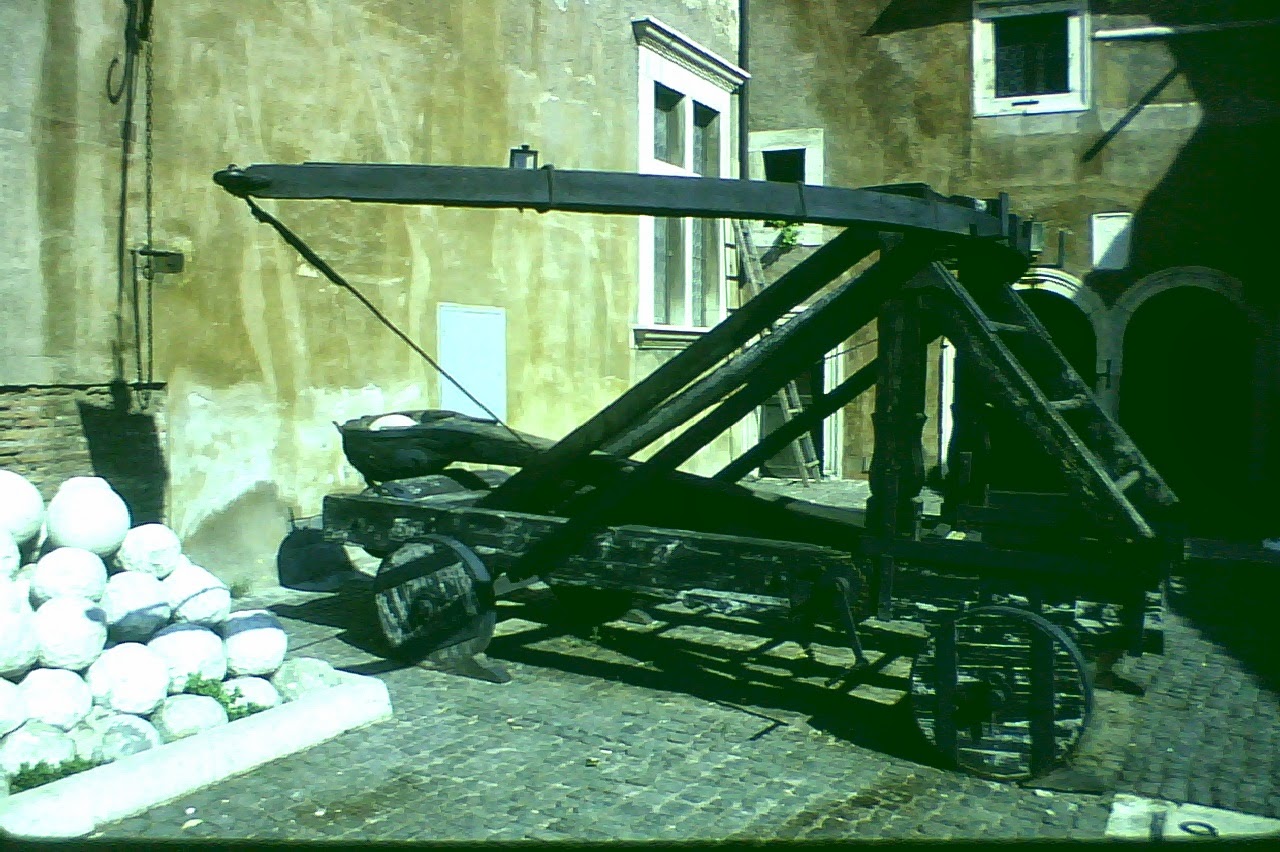 I found this magnificent catapult in a courtyard, complete with heavy balls of marble to be used as missiles. I wonder if some machine like this took part in the 1527 siege!
.
Posted by Peter G. Shilston at 06:56 No comments:

The Pooh Perplex, by Frederick Crews 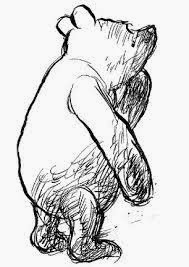 This is one of the cleverest and most amusing books I have read. It is a well-deserved parody of those "casebooks" in which students are given different interpretations of a work of literature. Frederick Crews, Professor of English at Berkeley, California, writes no less than twelve different takes on the Winnie-the-Pooh books, complete with suitably absurd questions and discussion-points at the end of each section. The Freudian, Marxist and evangelical Christian "interpretations" are especially funny. I also enjoyed a "lecture" from a Yale professor (named "Murphy A. Sweat") attempting to persuade an audience of sporting jocks to read something, by posing as "one of the guys", and an essay by "Simon Lacerous" (obviously meant to be F. R. Leavis), comparing the Pooh stories unfavourably with the works of D. H. Lawerence. After reading this book it is difficult to take any high-flown literary theory seriously.
Professor Crews has since brought things up-to-date with a second book of parodies, entitled "Post-Modern Pooh". 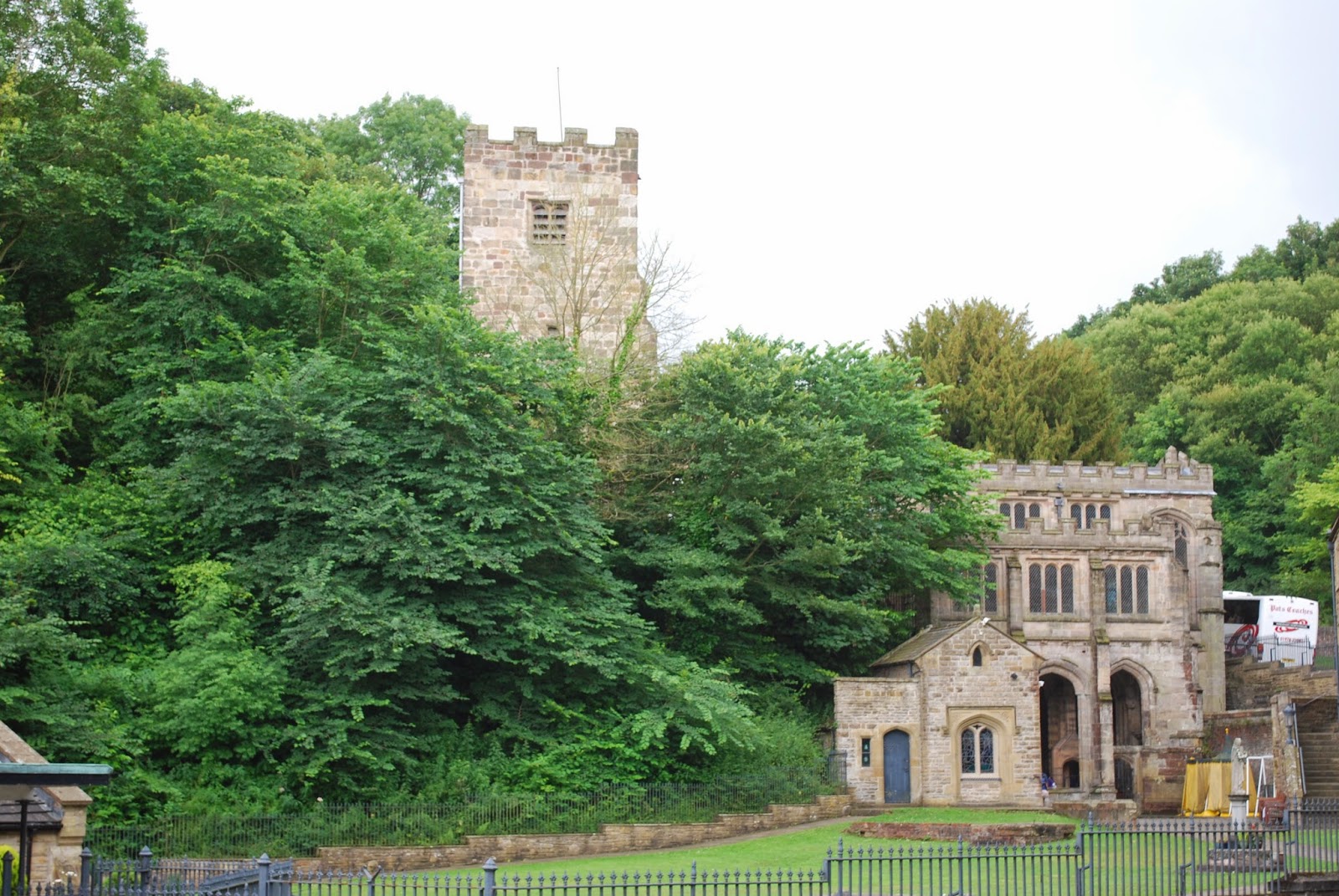 The sacred spring of St. Winefride at Holywell in Clwyd, north Wales, has been a place of pilgrimage for at least a thousand years. She was a virgin who was decapitated for rejecting the advances of a Welsh chieftain, and her blood turned into a spring of clear water. Fortunately her uncle Beuno, who was also a saint, picked up her fallen head, replaced it on her neck, and she was restored to life. To commemorate this miracle, pictures and statues of St. Winefride always show the line of a white scar round her neck.

The present shrine is late mediaeval, and may well have been built by Lady Margaret Beaufort, the mother of Henry Tudor. 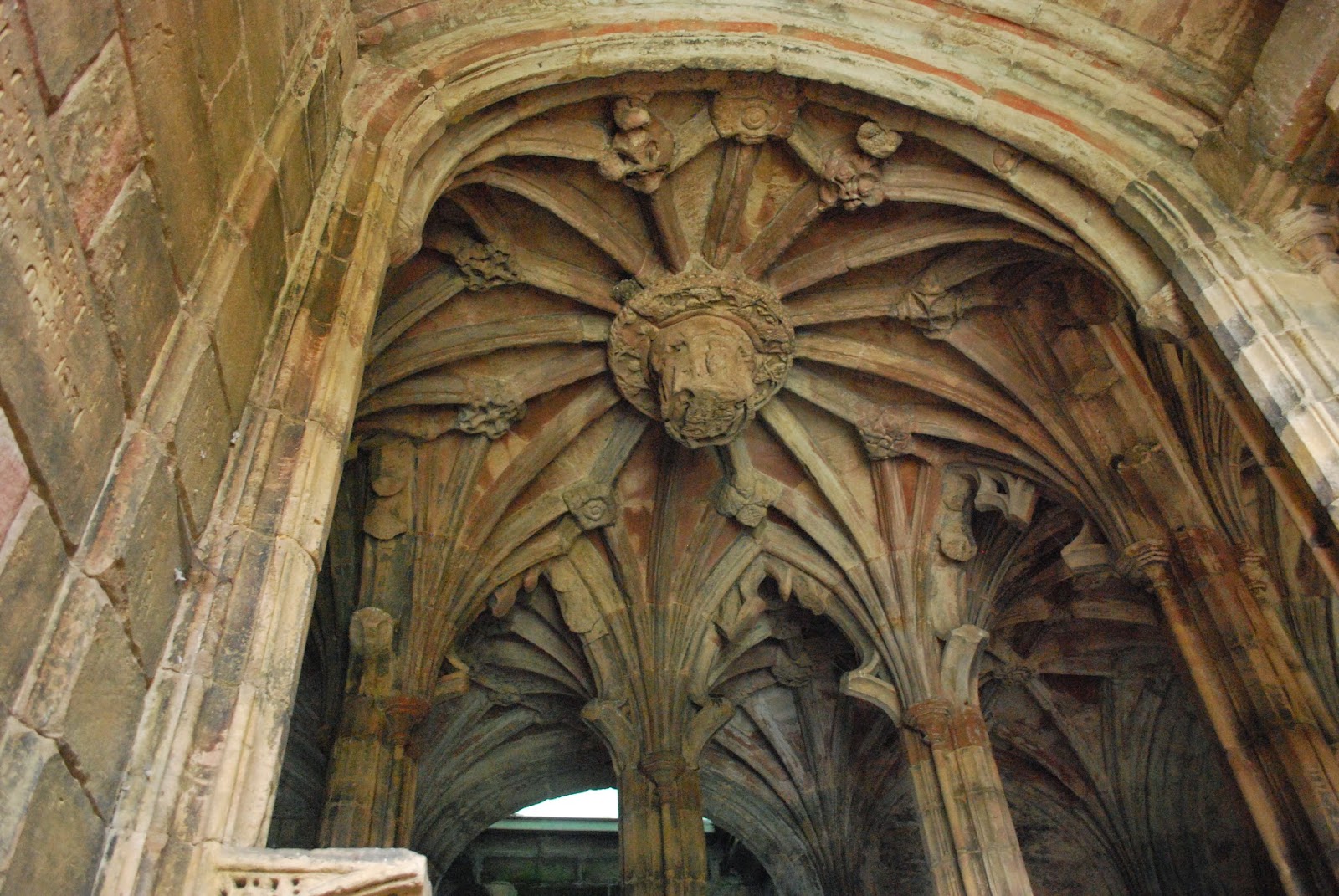 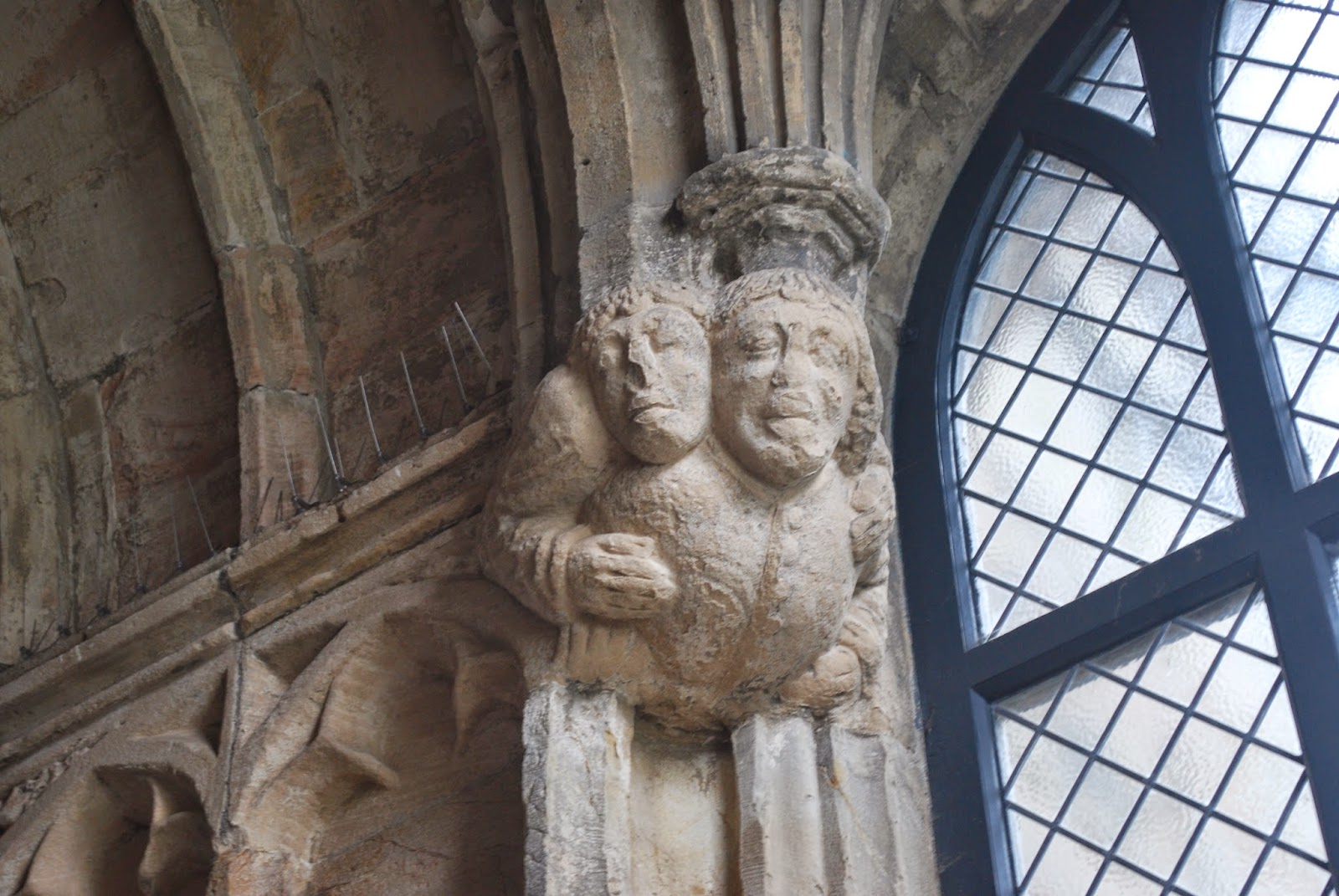 Several Kings visited the shrine, including Henry V, Edward IV and Richard III. After the Reformation it remained popular with Catholics, despite official disapproval. Some of the Gunpowder Plotters came here, to pray for success in their plan to blow up Parliament. James II came to pray for the birth of a son, and his prayer was answered, but the consequence was his overthrow in the "Glorious Revolution" of 1688. 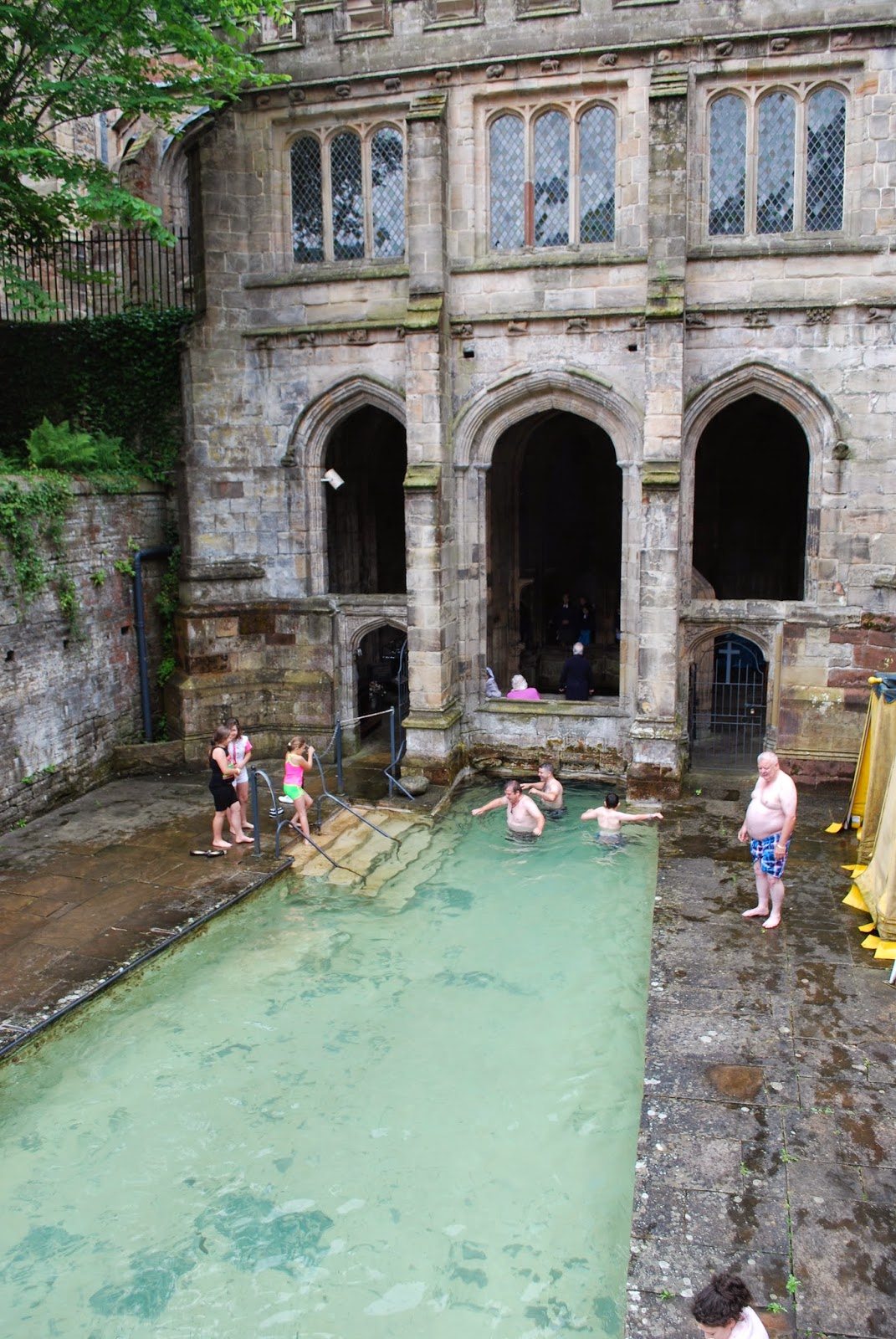 Families of Irish travellers are bathing in the miraculous healing waters, just as they have done for centuries. But Simon Jenkins points out that the original spring ran dry in 1917, as a result of local mining, and water had to be diverted from elsewhere!.
Posted by Peter G. Shilston at 01:26 No comments: