Travel: Arles and the Camargue 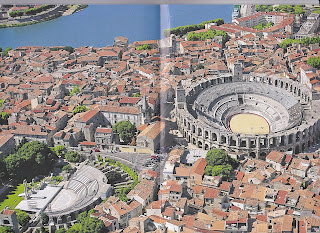 Almost fifty years ago I drove down to the south of France with a friend, in his little Morris Minor convertible, painted bright orange (this was the 1960s, after all!). We ended up in a youth hostel in a village called Salin-de-Giraud, very near the coast in the Camargue.  Some days we spent in the sea, but we also went on a trek with the famous white horses, we visited Arles and Nimes and the Pont du Gard aqueduct, and the village of Les Baux-en-Provence. Salin-de-Giraud had its own little arena for bullfights, but they couldn’t afford to kill the bull; instead they merely provoked it to charge and vaulted to safety over a wooden barrier. Occasionally the bull leapt over the barrier after them, causing confusion.
I liked Arles so much that I booked it for our honeymoon. The Ballet Rambert were performing in the Roman theatre, and were staying at our hotel. In the afternoon all these fit young men with bulging thigh muscles would appear at the swimming pool. We walked round the town and took a bus through the Camargue and down to the coast at Saintes-Maries-de-la-Mer. This summer I returned to Arles after a long break.

Arles is an ancient city, dating back to Roman times, when it was named Arlete Sextanorum. It retains a well-preserved Roman theatre and arena. 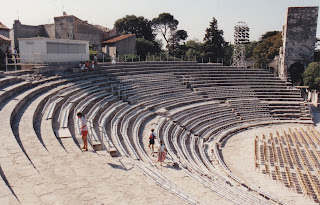 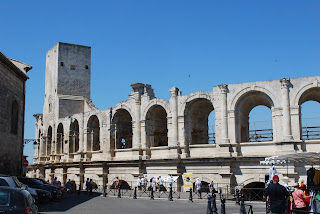 But I found this summer that, unlike on previous visits, we now had to pay to look at the theatre. It was expensive to visit the arena, and I’m sure you are no longer allowed to walk round the top. From the late Roman period comes the Alyscamps; a Christian burial site which is now reduced to a tree-lined lane of tombs. 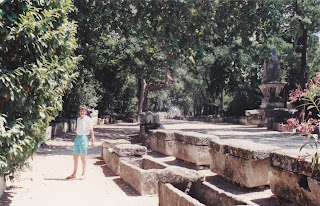 The most famous relic from the early Middle Ages, Saint Trophime church, where Frederick Barbarossa was crowned Holy Roman Emperor in 1178, was just as I remembered. There is a splendid west front, featuring a Last Judgement, 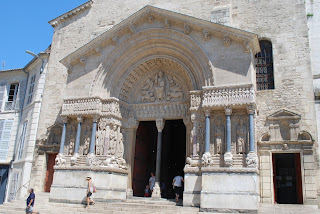 but what I like best are the cloisters, which contain wonderful carvings on the capitals. 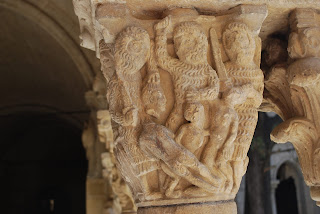 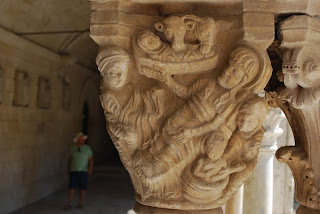 Nowadays, Arles makes much of its links with Van Gogh. His room has been recreated, and also the gardens of the asylum where he stayed. One can see what he meant about the wonderful light in the region. 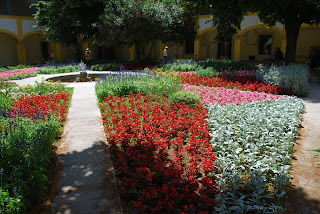 South of Arles is the Camargue; a roughly triangular area of swampy land, some of which has been drained for farming (including some rice paddies), while the rest remains a wilderness of marshes. 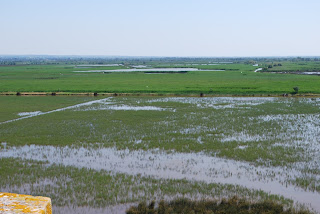 Here you can see the famous white horses, 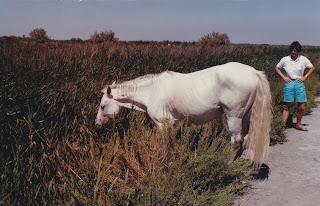 flamingos if you are lucky, 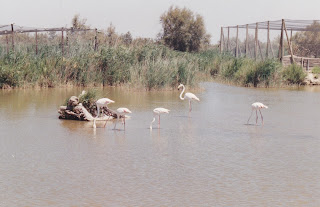 and the black cattle whose bulls fight in the arenas.

On the coast is the little town of Saintes-Maries-de-la-Mer, where Van Gogh painted the fishing-boats on the beach; 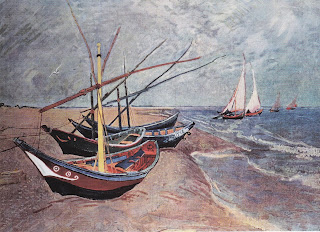 and which is now a seaside resort. The name is plural, because a whole boatload of saints are said to have landed here. The church has a collection of charmingly naïve paintings of residents who have been helped by the saints.

A new site for me was Aigues-Mortes, the port from where Louis IX (Saint Louis) set sail on his ill-fated crusade in 1248. The sea has now retreated, and what is left is a time-warp: a charming little mediaeval walled city, whose sole remaining function is tourism. 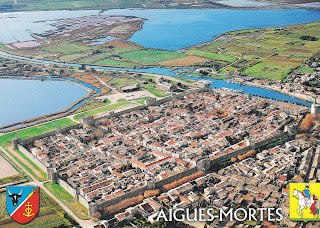 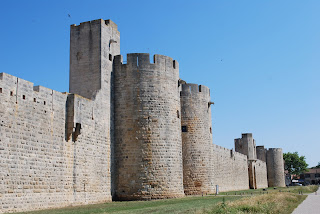 Nimes, on the western edge of the Camargue, is famous for its massive amphitheatre 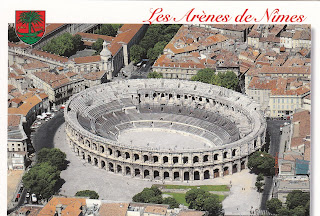 and a well-preserved Roman temple, the Maison Carree. 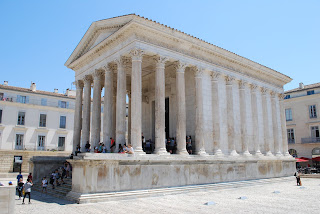 It also now has a marvellous new museum, which currently houses a superb display related to gladiators. Sadly, not a single booklet or postcard was offered for sale!

Finally we visited the Pont du Gard; the enormous Roman aqueduct across the river north of Nimes. I would have to say it was a touch disappointing. Half a century ago we visited it for free, and walked along the top. Now we found an elaborate visitor centre, fifteen coaches full of tourists, expensive tickets, and certainly no access onto the aqueduct itself. One can only say: that’s progress! 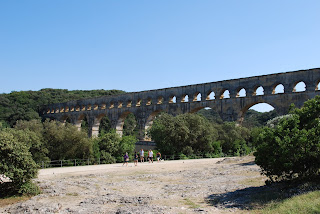 Labels: Travel: Arles and the Camargue

I presume that when Donald Trump visits Britain he will be greeted with many renditions of “Yankee Doodle Dandy”: the alternative American national anthem. But does he know what the song is actually about?
It is not generally realised that the word “doodle” is an 18th century slang term for a thickoe: a stupid person; and that the song is a satirical attack on the stupidity of Americans. In each verse, the Yankee Doodle does a succession of ridiculous things, but always believes himself to be marvellous. Even the lines when he “stuck a feather in his hat, and called it macaroni”, which sound like outright nonsense, are part of this: a “Macaroni” signified a young man-about-town who dressed in the latest Italian fashions. Yankee Doodle is so naïve that he thinks that merely sticking a feather in his hat elevates him to the height of fashion. All in all, the song looks highly appropriate for Mr Trump.

The case of alternative or substitute national anthems is always odd. In Britain nowadays the Scots sing “Flower of Scotland”, which is not a traditional song at all, but was composed by Roy Williamson of the folk group, the Corries, about 1969. And what do the English have as their alternative national anthem? “Jerusalem”!

The Popes at Avignon 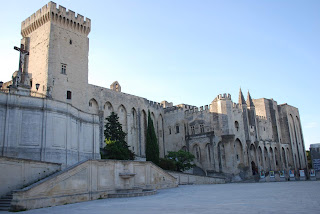 The story begns with the bitter conflict between Boniface VIII, elected Pope in 1295, and Philip IV, the King of France (Philippe le Bel). Philip was concerned with centralising his power in France, whereas Boniface, an energetic and aggressive Pope, insisted that the Papacy was supreme over all earthly sovereigns. Afte Boniface excommuniated Philip, the King struck. His minister, William de Nogaret, arrested Boniface at his summer retreat at Anagni in September 1303, allegedly hitting him in the face. Boniface was soon rescued by his supporters, but he dieda month later.
After the brief pontificate of Benedict XI (1303-4) the conclave was deadlocked for almost a year before electing the Archbishop of  Bordeaux, who took the name of Clement V. He never went to Rome, but moved around France before settling at Avignon; an insignificant town of just a few thousand inhabitants, but which had the benefit of being on the frontier between France and Provence. At that time the Count of Provence was a subject of the Holy Roman Emperor, not of the French King. The Popes were to remain there for 68 years; a period that came to be known as the "Babylonish Captivity".
Clement V proved to be a weak character, who failed to stand up to King Philip when the latter staged his brautal campaign to destroy the Knights Templar. It was said that when Jacques de Molay, the last Grand Master of the Temple, was burnt at the stake in Paris as a lapsed heretic in 1314, he denounced both King and Pope, prophesying that they would both die within the year - which in fact did happen.
There then followed a deadlocked conclave lasting two and a half years before the election of another Frenchman as Pope John XXII. He was already 68 years old, but proved to be full of energy. He bagan the building of the Palace of the Popes in Avignon, and was also responsible for the famous vineyard of Chateauneuf du Pape. His reign was followed by five more Popes resident at Avignon: Benedict XII, Clement VI, Innocent VI, Urban V and Gregory XI. 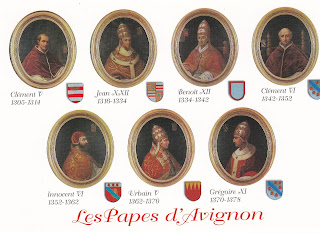 All were Frenchmen, and most were highly corrupt, practising rampant nepotism. The conclave was dominated by French cardinals. The Palace of the Popes grew to be the largest building of its kind in western Europe. Petrach visited Avignon, and was appalled and disgusted by the luxury he found there. 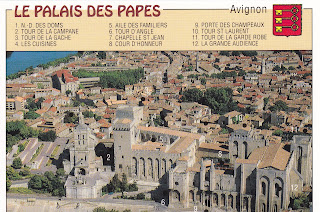 Urban V (1362-70) accepted the need to return the Papacy to Rome, and did indeed travel there, but soon gave up and went back to Avignon. Then Gregory XI (1370-8), following the importunities of Catherine of Siena, returned to Rome,intending to stay there, but soon died, aged only 48. The Italians then seized the initiative and elected as Pope  Bartolomeo Prignano, a Neapolitan of humble birth, with a career as a bureaucrat in the Papal chancellery. He took the name of Urban VI.

But this was not the end of the story for Avignon. Pope Urban soon revealed paranoid, even psychopathic tendencies; torturing and executing cardinals whom he suspected of treachery. Within a few months a group of dissident cardinals fled back to Avignon and declared Pope Urban deposed. In his place they elected Robert of Geneva, a violent, aggressive aristocratic cardinal, as Clement VII. Now there were two rival Popes, one at Rome and one at Avignon, busy pronouncing anathema against each other and their supporters.  The monarchs of Europe chose sides according to political convenience. This disgraceful episode, known as the "Great Schism", lasted into the next century. For a while there were even three rival Popes! It is no great surprise that early Protestant ideas, exemplified by Wyclif in England and Jan Hus in Prague, began to florish. The problem was not solved until the Council of Constance (1414-17), when the three rival Popes resigned or were deposed, Jan Hus was burnt at the stake (despite having received a safe-conduct from the Emperor Sigismund), and a Roman aristocrat, Oddone Colonna, was elected as Pope Martin V. The Popes never returned to Avignon.

But Avignon remained Papal territory. In 1348 Clement VI had purchased it outright from Queen Joanna of Naples (who also ruled Provence) for the paltry sum of 80,000 florins. This favourable purchase was probably not unconnected with the fact that Queen Joanna had come before the Papal court accused of murdering her husband. She was acquitted, but later deposed and killed in her turn.
While the Popes were in residence, it was a tolerant city (Jews were left in peace in return for paying a special tax), but it was also a haven for criminals fleeing justice from France. The lawless warbands who terrorised France during the Hundred Years' War were paid to stay away.
The Petit Palais, near the great palace, was remodelled in Renaissance style by Cardinal della Rovere, who later became Pope Julius II. 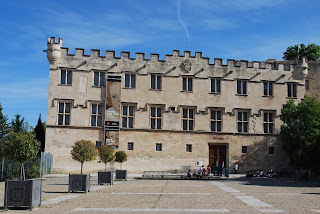 Provence was incorporated into France in the 15th century; but only with the French Revolution did Avignon become part of France. The Palace of the Popes was occupied and plundered and used as a barracks. No furniture survives, and of the lavsh decorations, only a couple of chapels and a few of the Popes' private rooms. But the days of glory were long past. 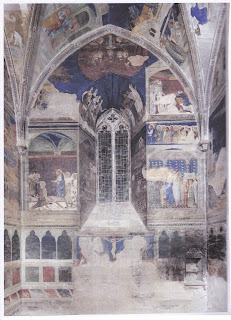 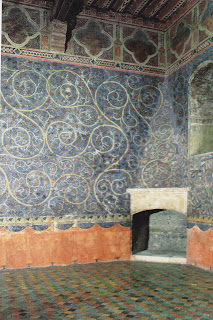 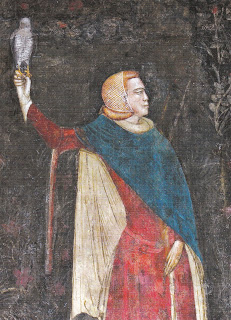 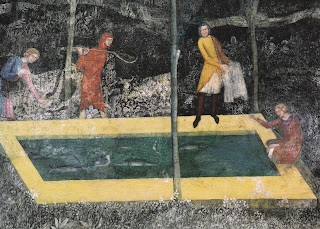 Is this the sort of luxury which so disgusted Petrach?
Posted by Peter G. Shilston at 22:48 No comments: