We celebrated  the Royal wedding last week, not by watching television, but by climbing to Rodney's Pillar in its imposing site on the border between Shropshire and Wales. 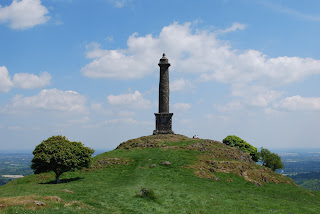 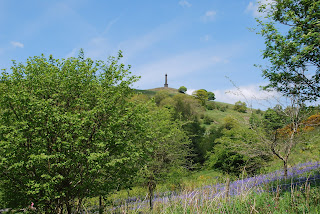 The meadows below the summit were full of bluebells 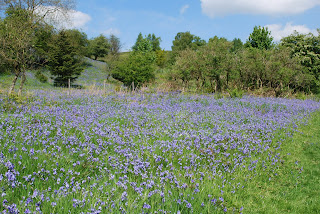 When we reached the pillar we were rewarded with magnificent views. 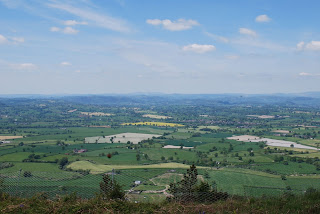 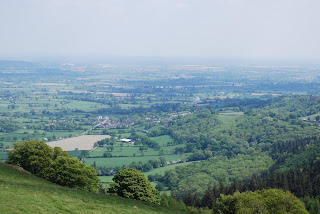 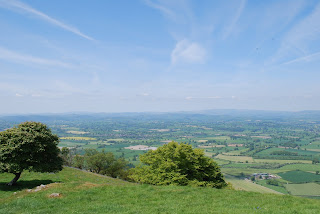 Admiral Sir George Rodney was the only successful British commander in the War of American Independence. After France and Spain joined the war on the side of the American rebels, Rodney defeated a Spanish attempt to seize Gibraltar, but then had to return home because of illness. While he was away, a French army and fleet crossed the Atlantic and trapped General Cornwallis’s forces at Yorktown, forcing his surrender to Washington in 1781 and effectively ending the fighting in America. After this success, the French fleet headed for the West Indies, with the aim of seizing Jamaica and delivering a further blow to the British Empire. But Rodney now returned, and destroyed the French fleet at the Battle of the Saintes. After this setback, the French were happy to broker a peace treaty between Britain and the Americans. Rodney was rewarded with a peerage, and the column was erected in his honour by “the gentlemen of Montgomeryshire”.
A good way of annoying Americans is to point out that, without the intervention of the French, they’d never have won their War of Independence!

An odd statistic from the Political Betting website: the final league table of the Premier League shows that all the top ten clubs, with the sole exception of Burnley, have their grounds in constituencies which voted Remain, whereas all the bottom five clubs are in constituencies which voted Brexit. A mere coincidence, perhaps; but the American writer P.J. O’Rourke in a recent book assessed both the Brexit vote and the election of Donald Trump as “The revolt of the losers”. Perhaps this applies in football terms too?
Posted by Peter G. Shilston at 23:35 No comments:

Labels: Thought for the day

John Locke and the Foundations of Whiggism

In 1660 the monarchy was restored, and a series of laws, known as the Clarendon Code, purged both church and state of religious nonconformists and subjected them to persecution. But Locke survived, and maintained his links with Christ Church another 20 years.
Like many talented intellectuals at the time, Locke was soon involved on the fringes of politics. In 1665 he was appointed the secretary to a diplomatic mission to Brandenburg, in Germany, and on return entered the service of Lord Ashley, who later became Earl of Shaftesbury. This was to be a seminal link in Locke’s life, and when in 1672 Shaftesbury became Chancellor of the Exchequer, he appointed Locke secretary to the Council of Trade and Plantations. , Locke also drew up a constitution for the new colony of Carolina in America. Soon, however, the ministry in which Shaftesbury served collapsed, and Locke retired to Oxford, and then to France, where he remained until 1680.
In autumn 1678 England became engulfed in a panic known as the “Popish Plot”, based on sensational allegations from a certain Titus Oates that a great conspiracy was in train, led by Catholic priests and prominent Catholic laymen, to murder the King and restore England to the Catholic faith. Hysteria reigned, and on Oates’s evidence a number of entirely innocent people were condemned and executed. But there was a political element to this, because the King, Charles II, had no legitimate children, and the heir to the throne; his brother, James Duke of York; was known to be a Catholic. Furthermore, James’s secretary, Edward Coleman, was discovered to be in treasonable correspondence with France, and was duly executed. Shaftesbury seized the opportunity to press for an Exclusion Act, to bar James from accession to the throne. He was opposed by royalists. As often happens, both sides coined rude nicknames for their opponents which soon became common currency. Exclusionists portrayed the Royalists as being secret Catholics, and named them after Catholic rebels in Ireland: the Tories. Royalists linked the Exclusionists with Calvinist rebels in western Scotland: the Whiggamores, or Whigs for short. (It’s odd to think that present-day Tories takes their name from the 17th century equivalent of the I.R.A.!). The names and the traditions survived, with the Tories as the party of the monarchy and the Anglican church; the Whigs quasi-republican and linked with religious nonconformity.
Locke’s contribution was ideological, as he began to write his famous “Two Treatises of Government”. The first part consisted of a refutation by ridicule of Filmer’s postulation of the “Divine Right of Kings”. But if political authority did not emanate from God, whence came it? Locke’s answer, in the second part of the book, was that authority originated in a social contract between government and the governed. The people consented to obey government provided that their natural rights were respected. Locke summarised these rights as being life, liberty and the possession of property. If these were illegitimately infringed by government, the social contract had been broken, and the people could justifiably overthrow the existing government and form a new one. In answer to the fundamental question; who decides whether government has wrongfully infringed the people’s natural rights; Locke had a radical answer: the people shall decide! This was incendiary stuff; and a century later it was adapted wholesale by Thomas Jefferson in the American Declaration of Independence.
Locke also wrote three “Letters on Toleration”, which argued that government should not persecute people for their religious beliefs. However, he made an exception for Moslems, who could not be tolerated. This appears very strange, since there would have been practically no Moslems in Britain at the time; but everything suggests that Locke was using “Moslems” as a code-word for “Catholics”.

In the end, the furore over the “Popish Plot” diminished and the Exclusionists lost the political initiative. In 1683 a mysterious episode known as the “Rye House Plot”, an alleged attempt to kidnap the King and the Duke of York, led to a counterattack. Shaftesbury fled abroad to avoid arrest and died soon after; one Whig aristocrat, Algernon Sidney, was executed, and another, the Earl of Essex, committed suicide. London, which was strongly Whiggish, had its charter revoked and rewritten to bring the city under Royalist control. Oxford University formally condemned many republican doctrines, and conducted a public burning of offending books; the last public book-burning in Britain. It included many volumes from Locke’s own library, and he was obliged to attend the ceremony. In 1684 he was ejected from his Christ Church studentship. He never set foot in Oxford again.

Charles II died in 1685 and his brother James duly succeeded. He faced an immediate revolt by the Duke of Monmouth, Charles’s illegitimate son, which was duly crushed. Many rebels were executed, and Locke might well have felt his own life was in danger. He took refuge in Holland.
Despite this strong start, in just three years James had managed to alienate almost everyone with his Catholic policies. In November 1688 his son-in-law, William of Orange, landed near Torquay with a Dutch army and advanced towards London. James’s army commander, the future Duke of Marlborough, deserted and changed sides, James lost his nerve and fled abroad, and William and his wife, Mary, were proclaimed joint sovereigns in the “Glorious Revolution”. The initiative now lay with the Whigs, who wanted a clear statement that James had been justifiably deposed, with a written constitution defining the limitations of a monarch’s power. In the end there was a compromise: James was proclaimed to have “abdicated” by running away, and the hoped-for constitution amounted to little more than vague hopes expressed in the Bill of Rights. The most solid achievement was an Act of Toleration that ended persecution of Protestant nonconformist sects, though they were still excluded from participation in Parliament or government.

Locke was now able to return to England. His “Two Treatises of Government” was now published. It was for a long time assumed that he wrote it to justify the events of 1688, but it is now accepted that it was composed a decade earlier, at the time of the Exclusion crisis, as were the “Letters on Toleration”. There was also an essay “On the Reasonableness of Christianity”, which was denounced by all sides. He remains a seminal figure in the history of political philosophy. The party names, Whig and Tory, survived; though when the Whigs were permanently in government for 40 years after 1714 they naturally played down their quasi-republican credentials, and these only resurfaced with the American revolution. Locke’s critics have pointed out that he was somehow able to reconcile his theory of the Social Contract with his defence of slavery in Carolina, but this dichotomy was also conveniently overlooked by the American Founding Fathers.

It is clear that Locke was not a courageous man, since even after 1688 he strove to conceal his identity in his most controversial writings. His Letters on Toleration were published anonymously, and in Latin; and his “Two Treatises” was catalogued as anonymously written even in his own library! He was only acknowledged as the author from 1693. Peter Laslett calls Locke “a timid, introverted man”; but in view of the violent, dangerous times in which he lived, his timidity may be forgiven.