At Easter 1974 I went on a school visit to Romania. The country was supposed to be a totalitarian dictatorship under Ceausescu, but I had difficulty recognising this. Everything seemed much more relaxed and generally inconsequential than in Russia the previous year. There were no political slogans on the streets, and although there were armed guards at the hotel, they completely failed to deter adults from proposing currency transactions, and small boys trying to cadge chewing-gum, often right under the guards’ noses. In any case, the guards were only spotty teenage conscripts, who looked more afraid of us than we were of them. Although there were signs at military installations warning us not to take photographs, soldiers would lean out of the barracks and wave to us. We saw monks walking on the streets and greeting tourists at the Snagov monastery; and our guide, Michaela, lit a candle to the saints at the cathedral – for her mother, she said. . Michaela and the other guides made no attempt to feed us propaganda, and the name of Ceausescu was simply never mentioned.

Our first sight proved to be rather misleading: as we drove into Bucharest from the airport, we passed a huge field where a long line of women was hoeing the soil. We wondered if it was a labour camp, but when we had seen more of the country, we realised it was probably that they just didn’t have any tractors. The chief initial impression of Bucharest was that it all looked very French: the 19th-century terraces, the pavement cafes with their umbrellas, the titles of the shops (A bookshop was a “Librarie”, a grocer’s an “Alimentara”). The language seemed about two-thirds French, which made it easy to talk to the locals, whose French was generally better than ours. We went to see the huge and impressive monument to Gheorghe Gheorghiu- Dej, the hero of Romanian communism. It was a kind of tower of connected arches, in red granite. 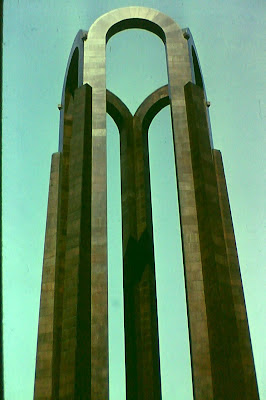 Inside was a circle of tombs for other heroes, some of them already occupied. We asked Michaela what would happen if they ran out of space for heroes in the future, and she said they would probably have to move up a layer. This hardly seemed a serious attitude. (I couldn’t find any mention of the monument in a recent guidebook to Bucharest, and I wondered whether it had been destroyed, which I think would be a pity from an aesthetic point of view) When I showed Michaela and her friends the communist party card-holder I had got in Russia the previous year, they were far more interested in the picture of Olga Korbut I had stuck inside it. I found a bookshop with English-language books, including a very cheap edition of Kipling’s “Just So Stories” with footnotes in Romanian, presumably explaining what a “bi-coloured python rocksnake” might be. There was a particularly charming incident when we drove back into Bucharest at the end of our tour. Our coach overtook a kind of cortege of limousines, and a bit further on, we met masses of flags and troops in their best uniforms pulling on white gloves. It turned out that we had overtaken the ceremonial state visit of the president of Costa Rica, but nobody much seemed to care. The best thing we saw in the Bucharest area was the “Village Museum” just outside the city, which had reconstructions of peasant huts and churches from all parts of the country. It could have looked thoroughly bogus, but we found it fascinating.

After two days we drove to Predeal, up in the Carpathian mountains, and entered a different world. It was an isolated town surrounded by threatening peaks rising to six thousand feet, with impenetrable forests on the lower slopes and deep snow above the tree-line. When we went in a cable car up to the summit, we saw that the whole place was clearly virgin skiing territory, but there was nobody there. We stayed in a chalet. Nights were very cold, but the windows were triple-glazed and our rooms kept warm with very attractive porcelain-tiled stoves with gas-rings inside. From here we visited Peles castle, an elaborate 19th century hunting lodge built for the Romanian royal family, and the town of Brasov. This looked exactly like somewhere in southern Germany, which was not surprising because it was originally built and inhabited by Germans. Before the war, its name was Kronstadt, but after 1945 the surviving Germans were all driven out and the place was renamed. Alongside the church we found a statue of Romania’s only humanist. We had a very nasty incident at night in Predeal. Two of the boys drank too much Chinese vodka from the local store, and, in a confused state, decided to go for a midnight walk in the woods. They were wearing only t-shirts and jeans. Inevitably, they got lost, and then began to suffer from exposure. We were roused at 3 a.m., and then one of them staggered back to the chalet, too incoherent to explain anything, and so far gone that he had taken off his boots at some point and continued his walk barefoot. The other was nowhere to be seen. Fortunately, he was safe, and we found him the next day. He was lucky enough to collapse in the front garden of a local peasant, who took him in and put him to bed, but had no idea where he came from. A day later, both were recovered. A strange part of the story was that, when we first discovered the two were missing, Michaela tried to ring up the local militia, but there was nobody on duty there. So much for a police state, we thought: there’s no-one down the cop-shop when you want them!

Then we drove through more mountains to Curtea de Arges. The town itself had a fine early mediaeval Princely Church, and an elaborate later cathedral. When I wandered around on my own, I found a little painted church, with pictures of the saints around the outside. We had seen these in the Village Museum, but for the most part this style was to be found in Moldavia, up in the north-east of the country . But the main reason for this stop was that it brought us into Dracula territory. The original Count was actually a prince of the 15th century, Vlad Tepes: Vlad the Impaler, or Blood-drinker (see footnotes): so called not because he bit people in the jugular, but because of all the Turks he managed to slaughter as they tried to invade his territory. This made him very much a local hero. Already the Romanians were cottoning on to the fact that money could be made out of this link: we found pictures of Vlad in imitation of church icons, and bottles of “Dracula” plum brandy in the shops. We toured a local castle called Castle Bran, which was very picturesque and frequently appeared on Dracula movies, though there is little evidence that he actually stayed there. The real Dracula’s castle was in a very remote place up in the mountains, and after climbing up the 1400 steps to the ruins, with an icy wind hissing through the pine trees and shreds of mist boiling up from the valley below, it was easy for us to see how Bram Stoker believed the place was haunted – though in fact he never went anywhere near the Carpathians in his life, and drew all his information and atmosphere from travel books! 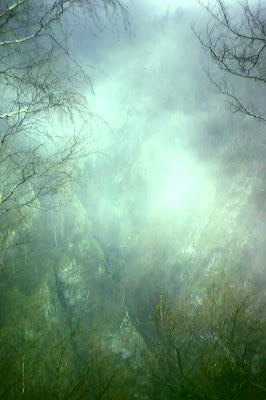 We were equally fascinated by the peasant villages through which we passed. There were a great many tiny wattle-and-daub cabins which could have come straight out of the Village Museum, though these were being replaced by brick cottages. All, new or old, had gaudily-painted porches. There was a well every so often, suggesting they had no running water, but on the other hand every home had a TV aerial. We passed old women spinning wool by hand. Once when we stopped, a peasant came by with his ox-cart. I took a photograph of him, and he made signs indicating he wanted pencil and paper. He then wrote down his name and address, so I could send him a copy of the picture, which I later did. Again, this hardly seemed the behaviour of a people terrified of the secret police. But our drive did bring home the level of poverty still existing in Romania, and made us wonder what it must have been like before the war.

Our experiences at the airport awaiting departure summed up our visit. We realised we’d never had a group photo of the trip, so we went out onto the tarmac and took one. No officials seemed to mind this serious breach of security. While we were hanging about in the departure lounge someone managed to upset a large ashtray container, and a live bullet fell out of the rubbish. We felt the only thing to do was replace it quietly and move on.

Our overall impression of Romania was of friendly and harmless inconsequence. Comments made after the fall of communism, about how it was a ruthless totalitarian dictatorship, have always puzzled me. Possibly things got much harsher in later years. It should also be remembered that Ceaucescu was viewed for many years in the west as the “good guy” of communism, because he obstinately refused to follow the Russian line in foreign policy. Romania refused to sent troops to help crush the “Czech Spring” in 1968, and equally refused to join the Russian boycott of the 1984 Olympics in Los Angeles. It is ironic that Ceausescu, who refused to follow the Russian line, was the only eastern European leader to be executed after the collapse of communism in 1989; just as Yugoslavia, which under Tito was communist but neutral in the Cold War, was the only ex-communist state to disintegrate into violent civil war!

Footnote.
“Count Dracula” was a prince, not a count. He lived in the 15th century in Wallachia rather than Transylvania, and became a local hero through his ferocious battles against the Turks, who were spreading their empire northwards through the Balkans. His name was Vlad, the same as his father; who was known as “Vlad Dracul”: “Vlad the dragon”; so our man was styled “Vlad the little dragon”: “Vlad Dracula”. Stories of his bloodthirsty deeds, such as impaling thousands of his enemies alive on stakes, spread to western Europe. But before Bram Stoker I don’t think anyone connected him with the old folk-legend of the Vampire: the ghost that drinks the blood of living people at night. (Vampires occur in British horror-stories before Stoker). Incidentally, since the collapse of communism historic properties have been handed back to the families of their pre-war owners, so Castle Bran now belongs to the Habsburgs!
Posted by Peter G. Shilston at 06:42