In April 1815 the volcano Tambora, in what is now Indonesia, began to erupt, and continued to do so for several weeks. This was the greatest eruption in recorded history, ten times the magnitude of Krakatoa. Its immediate effects were witnessed by Sir Stamford Raffles, the colonial official who founded the port of Singapore, who was at that time lieutenant-governor of Java. He described three immense columns of flame rising into the sky, detonations loud enough to be heard in Sumatra, 1600 kilometres away, three days of total darkness in Java, rocks as big as his head falling 10 kilometres from the volcano, and nearer the scene, total devastation. 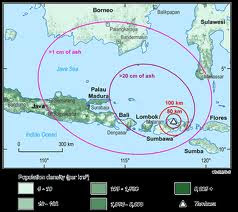 Apart from several thousand immediate casualties, at least 80,000 local people were to die of starvation and disease as ash buried their crops and contaminated their drinking-water. But the impact of Tambora was to be far greater than that. Modern research suggests that at least ten cubic kilometres of material was flung into the atmosphere as the top third of the mountain blew itself off, leaving a gigantic crater. 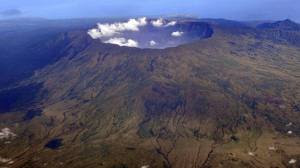 200 million tons of sulphurous gases from the volcano quickly circled the globe, combining with water in the atmosphere to form droplets of sulphuric acid, blocking out the sunlight and causing a sharp fall in global temperatures over the next couple of years (as much as ten degrees in some places), with disastrous changes in weather conditions. It is possible that the eruption helped cause the unseasonal torrential rain in Belgium in the summer of 1815; reducing the fields to quagmires for the Waterloo campaign and forcing Napoleon to postpone his attack on Wellington’s position till the afternoon, with fatal consequences for himself. But the full effect of Tambora was felt the next year.

1816 was “the year without a summer” in Western Europe and North America. In Canada the ice never melted. There was frost in Connecticut in June, and snow in Quebec, New York state and Maine. Crops failed and livestock died. Things were even worse in Europe. Switzerland experienced its coldest summer for 500 years; in many areas peasants tried to subsist on boiled grass and thousands fled to the towns in search of food. Perhaps 200,000 died of famine all told.

In Britain the end of the Napoleonic wars caused the profound economic dislocation inevitable at the conclusion of long conflicts, with thousands of soldiers demobilised, munitions industries closing, and thus a sudden rise in unemployment. Grain prices had risen to unprecedented heights during the war (a load of wheat cost far more in the Napoleonic wars than in the First World War, even before we allow for inflation over the intervening century!), and after the war prices were kept artificially high by the “Corn Laws” which protected British farmers against cheap imports. Not that there would have been any cheap continental grain available in 1816! The result was several years of hunger and social disturbance, which was met with governmental repression culminating in the notorious “Peterloo massacre” in Manchester in 1819. 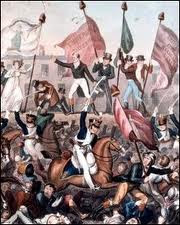 In Ireland the potato crop failed two years running, and there was a famine that was a preview of the disasters of the 1840s. A typhus epidemic swept Europe, and a new strain of cholera appeared in India and quickly spread worldwide. In the old school textbooks these years were always labelled the time of “distress and discontent”, but I don’t recall the Tambora eruption ever being mentioned as a contributory factor.

There were even artistic consequences. The lurid skies resulting from the volcano are said to have influenced in Turner’s paintings. Byron, Shelley and his wife were on holiday in Italy, and being confined indoors by the bad weather, occupied their time writing ghost stories. Mary Shelley (the daughter of the radical writer William Godwin and the early feminist Mary Wollstonecraft) was inspired to write “Frankenstein”; a not unfitting tribute to this terrible year.
Posted by Peter G. Shilston at 01:28

Labels: History: 1816: The year without a summer