Inherit the Truth, by Anita Lasker-Wallfisch

This is the autobiography of a German-Jewish lady who survived the Holocaust thanks to her skill as a cellist. Anita Lasker, as she was then, was born in Breslau in Germany in 1925, one of three daughters of a prosperous, musical middle-class Jewish family. She showed great early promise as a cellist, but her childhood and youth witnessed increasing anti-semitic discrimination and persecution. One of her sisters, Marianne, managed to escape to England, but in April 1942 her parents were deported to Poland and never seen again; and that autumn Anita and her other sister, Renate, were arrested for trying to flee to France. They were imprisoned, which paradoxically could well have saved their lives, because it meant they were not deported to Auschwitz-Birkenau until autumn 1943.
On arrival there she was saved from "selection" for the gas chambers by letting slip that she was a cellist. Although she was still only 18, and had not been able to practise since her arrest, she was immediately recruited into the Auschwitz orchestra: a bizarre organisation of internees which gave concerts for the guards and played marching tunes for the slave labourers as they were driven out to their work. Again, her life was saved.
Auschwitz was run down in late 1944 as the Red Army came near. In October of that year, Anita and Renate, together with countless others, were taken westwards to Belsen. Here there were no mass gassings, but instead gross overcrowding, starvation and typhus epidemics as Nazi Germany collapsed. Why the guards did not simply throw away their uniforms and lose their identity in the turmoil of refugees remains a mystery: instead they kept the camp going, with an ever-mounting death rate, until British troops arrived in April 1945. Nothing could have prepared the soldiers, battle-hardened though they were, for the appalling sights that met them: the heaps of emaciated copses, and even the survivors little more than walking skeletons. Anita and Renate remained on the scene to give evidence at the trials of the Belsen guards, which resulted in the hanging of eight men and three women.
After some bureaucratic delays, Anita managed to move to England, where she married and began her career as a cellist. 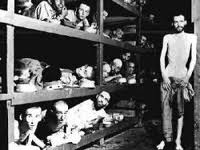 I was fortunate enough to meet Anita Lasker-Wallfisch when she gave a very moving lecture about her experiences. I asked her to comment on what I had read; that the most brutal guards in the concentration camps were often not Germans, but people drawn from minority groups in Eastern Europe, such as Lithuanians and Ukrainians. She agreed with this: her view was that for most Germans, antisemitism was essentially intellectual or academic; whereas for many of these other peoples it was much more visceral: they simply hated all Jews.
Posted by Peter G. Shilston at 00:04