My Early Life, by Winston Churchill

This must be one of the most entertaining autobiographies of all time. Churchill wrote in in 1930, when he had already served as a Liberal cabinet minister under Asquith and Lloyd George, and as Conservative Chancellor of the Exchequer under Baldwin, but was now embarking on nine fruitless years out of office. The book covers the time up to the start of his Parliamentary career in the first years of the 20th century.

Churchill passes quickly through what he portrays as his distinctly unpromising youth: an appalling prep school, years of underachievement at Harrow, then Sandhurst (where he needed two attempts, and the services of a "crammer", to pass the entrance exams), a commission in the Fourth Hussars and a posting to Bangalore in India. There, he tells us, his education really began, with a programme of serious reading in his leisure-time. (It is interesting that a hundred years earlier the future Duke of Wellington had embarked on a very similar campaign of self-education under much the same circumstances) Churchill developed his sonorous prose style by devouring the great classic historiansGibbon and Macaulay. 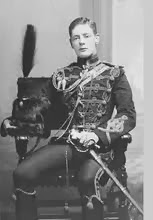 This is where the story really starts. The book is largely taken up with Churchill's adventures, which took the form of searches for battle. The odd thing is that none of these stemmed from his normal regimental duties He first came under fire in Cuba, of all places, where he travelled to witness the attempts of the Spanish colonial forces to put down a rebellion on the island. He then obtained leave to join a campaign to crush some troublesome tribes on the north-west frontier of India, where he witnessed his first killings and had the first of his many narrow escapes from death. This expedition enabled him to write his first book, "The Story of the Malakand Field Force". A map shows us how depressingly familiar that region is today, for Churchill was writing about the Swat valley and the "Tribal Areas" of Pakistan on the Afghanistan frontier. Churchill's comments on the outlook and behaviour of the tribes still hold true today, though nowadays we blast them from drones in the sky rather than deter them from rebellion by burning their villages and destroying their crops as Churchill's expedition did. (Oddly enough, he makes no reference to Islam at all in this book)

Next came the Sudan, where General Kitchener had been sent to destroy the power of the Dervishes and avenge the killing of General Gordon at Khartoum. Kitchener was most reluctant to allow Churchill anywhere near the campaign, considering him an pushy young self-publicist (which he was, of course!). Only after intense lobbying by his mother and friends (even the Prime Minister, Lord Salisbury, was persuaded to put in a good word for him!) did Kitchener surrender with an ill grace and allow Churchill to join the expedition as a supernumerary unpaid Lieutenant in the Lancers. There he took part in the last cavalry charge ever made by the British army at the battle of Omdurman, where he shot two Dervishes and again narrowly avoided being killed himself. This led to another book: "The River War", which was again very well-received.

Churchill's next step illustrates his limitless ambition. He resigned from the army in order to fight a bye- election at Oldham as a Conservative candidate. M.P.s at this time were still unpaid, and he proposed in future to support himself by his writing. As it happened, his attempt to enter into Parliament failed, but this enabled him in autumn 1899 to go to South Africa, where the Boer War was just starting, as war correspondent for the "Morning Post", at the extraordinarily high salary of £250 a month plus expenses.

More adventures followed. He was in a troop train derailed by Boer artillery, was taken prisoner and interned, escaped, was a fugitive with a price on his head ("£25: dead or alive"), hid in a coalmine and on a goods train which took him to safety in the Portuguese colony of Mozambique. From there he returned to South Africa, rejoined the army, survived the disaster of the battle of Spion Kop and took part in the relief of Ladysmith. The publicity gained from all these exploits led to his election as M.P. for Oldham at the general election of 1901.

So, at the age of 26, Churchill found himself already famous as the hero of many adventures, a popular writer and journalist, and now a Member of Parliament. Before taking up his seat, he embarked on a hectic lecture tour of Britain, and then of the United States and Canada, which left him with £10,000 in the bank: an enormous sum for the time, which preserved him from financial worries for many years. Few young men could ever have achieved so much in so short a time, and his meteoric career was only beginning, for in less than ten years he would be a Cabinet minister.

But none of this could have been achieved without Churchill's family connections. His grandfather was the Duke of Marlborough; his father, Lord Randolph, (who died shortly before Churchill joined the army) was the most charismatic young Conservative politician of his generation; his mother was a great society beauty. From his infancy he had been introduced to everyone who mattered. As a young subaltern he was invited to a private dinner where the Prince of Wales was a guest - and contrived to irritate his future sovereign by arriving twenty minutes late! His early books were read and praised in the highest circles.The great Joseph Chamberlain, cabinet minister and apostle of Imperialism, came to Oldham to speak on his behalf in the election campaign.
Throughout the book Churchill takes pains to contrast the view he had of the world as a gung-ho young army officer with how he now perceives things as an experienced government minister in his fifties. Looking back, he regrets that he never had a chance to go to university, but feels that what he lost in academic education was more than compensated by what he gained in experience of life.

When one reads a biography of Churchill, such as the splendidly-written one by Roy Jenkins, one realizes how much of the story Churchill left out. One could hardly expect him to have publicized that his father apparently died of syphilis, or that by the time he was a rising young politician his mother (described by Jenkins as a "serial adulteress") was married to what we would nowadays call a "toy-boy", scarcely older than Churchill himself. His younger brother Jack receives barely a mention. His years at Harrow were not as unproductive as he implies. I used to know a history master at Harrow, who told me that some of Churchill's essays were preserved in the school archives, and that they were very good. Churchill dismisses in a single line the fact that he won the Public Schools Fencing Championships; whereas he devotes several pages to his exploits on the polo field as a young army officer. (For some reason, successful English people take a delight in positively boasting about how useless they were at school. I cannot imagine a German or Japanese behaving like this!)
The last sentence of the book refers forward to September 1908, "When I got married and lived happily ever after". Not only does Churchill not give the name of his wife, but there has been no mention in the book of any girlfriend whatsoever! In fact the only woman apart from his mother appear  in the book is his old nurse, Mrs Everest. What are we to make of this?

It was inevitable that such a dramatic story should be made into a film: "Young Winston", with Simon Ward in the title role and Robert Shaw and Anne Bancroft as his parents.
Posted by Peter G. Shilston at 00:07