Not so long ago I was in the process of discussing philosophy with a group of students, one of whom was a Russian. Somehow the question of the Russian bombing of Chechnya crept into the discussion, and at once he bristled. “You accept that the Chechens are all al-Qaida?” he demanded. Well, the answer to that must be “No”: anyone with any knowledge of the history of the Caucasus would know that Chechens would have every reason to hate Russians without the need of any imput from al-Qaida. I fear my Russian student knew little of the history. 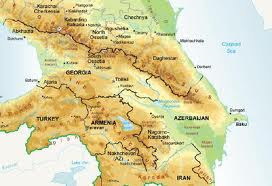 Georgia and Armenia were two ancient independent Christian kingdoms, always under pressure from the Moslem Turks and Iranians. Early in the 19th century both became part of the Russian Empire, along with the Moslem territory of Azerbaijan to the east of them. The last Tsar, Nicholas II, thus boasted, amongst his many other titles, those of “Tsar of Georgia, Lord of the Provinces of Armenia, Sovereign of the Circassian Princes and the Mountain Princes”, all of which refer to the Caucasus and the lands beyond; the last title specifically referring to the Chechens amongst others. The trouble, from the Tsar’s point of view, was that Georgia and Armenia were separated from the rest of his empire by the Caucasus, a vast mountain range inhabited by a confusing patchwork of different peoples: Ossetians, Ingush, Chechens, Avars and many others; some Moslem and some Christian; many of them ferocious warriors and regarded by the Russian government as little better than lawless bandits. (The only British parallel, though on a much smaller scale, would be the Scottish highland clans before 1745). Resistance to the Russians was led by Shamyl, a Moslem chieftain from Daghestan who saw himself as fighting a holy war against the infidel invaders. the war continued for decades and it was only in 1856 that ferocious scorched-earth tactics forced Shamyl to surrender. He was permitted to go to Arabia to die.

During these decades of struggle in the early 19th century, the Caucasus was a “wild south” for Russia, much as the Wild West was to Americans soon afterwards. Russian intellectuals were fascinated by mountain warriors, with their strange codes of honour, and by the beautiful, untameable women. Pushkin went there during his exile from St Petersburg. Lermontov used the region as the setting for the first great Russian novel, “A Hero of our Time”. Tolstoy served there in his army days, and used his experiences in two early stories, “The Cossacks” and “The Raid”, which describe the Cossack forces holding the line of the River Terek against the mountain clans. He reverted to the theme at the end of his writing career. One of his last stories was “Hadji Murat”, which is based on an actual historical character: a Chechen chieftain and ally of Shamyl who attempted to defect to the Russians but was trusted by neither side and was eventually killed.

The Russians built the Georgian Military Highway through the mountains. They buuilt cities like Vladikavkaz (the name meaning “Hero of the Caucasus”), and, to intimidate the Chechens, Grozny, whose name actually means “fear” or “terror” (The Tsar known in Britain as Ivan the Terrible is, in Russian, Ivan Grozny). Eventually a bandit from the mountains took over the Russian state, in the person of the Georgian Joseph Djugashvili, better known as Stalin (though some maintained he was not a true Georgian, but actually half Ossetian!).

One of the surprising achievements of the Soviet government was to cause the continuation of almost all the old Tsarist empire, with its great patchwork of minority races. It is safe to presume that many of the mountain peoples resented Russian rule as much as they do now, but to the Soviets, those who resisted the rule of Moscow were branded “petty-bourgeois nationalists”, an epithet improbably applied retrospectively even to Shamyl. (How a bandit clan chief could ever be described with a straight face as “bourgeois” tells us something about Soviet propaganda). Near the end of the Second World War, Stalin imposed his own solution to the problem, and a very typical one it was too: the Chechens, the Ingush and various other races were accused of having collaborated with the Nazi invaders, rounded up down to the last woman and child (even soldiers serving in the Red Army were included!) and shipped off to the wilds of central Asia or Siberia, where over the next few years about a third of them died. Eventually Khrushchev permitted most of them to return to their homelands: a development which the present Russian government presumably regrets.

When Communism collapsed and the USSR was dissolved in 1991, the constituent “republics” overnight became fully independent states, with the frontiers decreed for them by Stalin in his constitution of 1936. Having been part of the Russian empire and then the Soviet Union for almost 200 years, it could hardly be expected that these political frontiers of the new Trans-Caucasian states bore much relation to ethnic ones, and wars have continued there, on and off, ever since. The homeland of the Ossetians ended up being half in Russia and half in Georgia, which led to the recent war there. But most of the North Caucasus was legally part of Russia, whether the people there wanted it or not, and the attempts by the Chechens to gain independence have resulted in two brutal wars and terrorist retaliation. Grozny, built by the Russians, has been destroyed by Russian bombs; an event which the western powers have viewed with remarkable indifference. Just imagine the howls of condemnation that would have come from Washington if it had been a Communist government doing the bombing!

I have been interested in this region after visiting it back in 1984 (see an earlier blog entry under the heading of "Travel"). I have attempted to express my feelings about the Caucasus in the Blog entry that follows -
Posted by Peter G. Shilston at 14:05