I would like to introduce Britain's greatest-ever political cartoonist, James Gillray (1756-1815). Here are three of his works:- 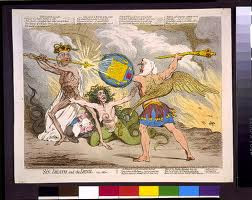 This one is dated June 1792, and is entitled "Sin, Death and the Devil", a reference to a scene in Milton's "Paradise Lost". It refers to a struggle for power between the Prime Minister, William Pitt the younger (on the left) and the Lord Chancellor, Lord Thurlow. Between the two is Queen Charlotte, wife of King George III. This must be the most revolting portrayal of a Queen of England ever! 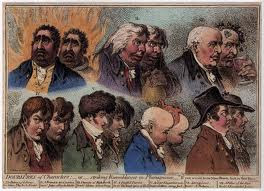 This one, published in November 1798, consists of double caricatures of seven prominent leaders of the opposition Whig party. It was a constant theme of Gillray's that the Whigs were traitorous supporters of the French Revolution, and wished to bring revolution to Britain too. So here charles James Fox doubles as Satan, the playwright-politician Sheridan as Judas, the Duke of Norfolk (a notorious alchoholic) as Silenus; and, in the lower row, George Tierney as "the lowest spirit of hell", Sir Francis Burdett as "Sixteen-string Jack" (a famous highwayman), Lord Derby as a baboon (complete with the French Revolutionary "Cap of Liberty") and the Duke of Bedford as a Newmarket jockey. Gillray clearly had little to fear from the laws of libel! I consider this a particularly brilliant exercise in caricature. 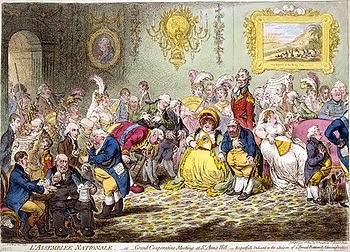 Several of the above figures can be recognised in this cartoon of June 1804, depicting a social gathering of all the opponents of William Pitt's government. Fox and his wife are in the centre, Sheridan and Derby are present, and Norfolk, seated front left, can be identified by the drink in each hand! The notorious Duchess of Devonshire and her sister are immediately behind Fox. But the key figure is the man in the blue coat who is only half shown on the extreme right. This is George, Prince of Wales, later Prince Regent, whose hatred of his father, George III, led him to associate with the opposition. The fat lady on the sofa is the Prince's mistress, Mrs Fitzherbert, who bears on her fan the Prince's emblem of three ostrich feathers. Note also the symbolism of the pictures on the far wall: in the centre, Napoleon as Atlas holding up the world, on the left, George III in shadow, and on the right, a large picture entitled, "Worshippers of the Rising Sun". In point of fact, when George III finally became incurably insane in 1810, the Prince Regent deserted the Whigs and quickly proved to be even more reactionary than his father! 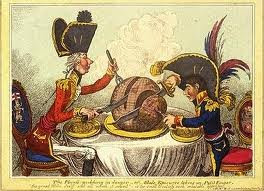 Finally here is a particularly famous one, from February 1805, entitled "The plumb-pudding in danger". Pitt and Napoleon are carving up the world: Napoleon grabs most of Europe, but Pitt, with Britain's superior naval power, takes the oceans.

These cartoons were not published in newspapers. Gillray worked by engraving, which meant that all this elaborate detail had to be scratched with a stylus in mirror- image on metal plates. Prints were then taken from these, coloured in by hand, and sold. At his peak, Gillray was able to produce several of these cartoons in a week; an amazing achievement. But such productivity took its toll, and he became blind and mentally deranged a few years before his death.
Many Gillrays come up for sale nowadays, and a large selection can be found on the internet. I was first introduced to Gillray by a fine biography by Draper Hill: "Mr Gillray the Caricaturist". Some years ago the Tate Gallery in London staged a major Gillray exhibition: it is possible that the magnificently-illustrated catalogue is still available.
Posted by Peter G. Shilston at 13:54