This is one of the strangest places I have ever visited. We drove for hours across the central Anatolian plain; as flat as the Fens, though three thousand feet above sea level. I have no idea how the Crusaders or other travellers navigated their way across it. Nowadays it is a huge and completely treeless barley field, with a scattering of depressed-looking mud-built villages which served only to deepen the monotony. Then suddenly we came to the Goreme valley, in what in Classical times was called Cappadocia. The region consists of a very thick layer of soft volcanic tufa, which has been heavily eroded away by the weather; but in places boulders of harder rock have protected the tufa beneath them, and “fairy chimneys” have formed. These are innumerable, and in all shapes and sizes: spires and towers of every conceivable pattern; some isolated, some packed densely together in regiments. 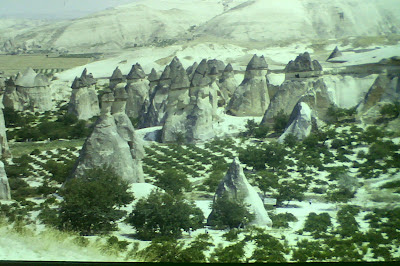 The tufa is very fertile, and the rare bits of flat ground were covered with vines and melons. The strangest feature, however, was that for thousands of years the fairy chimneys had been inhabited, with homes and even churches cut out of the rock.
We spent several days there, going first to the open-air museum at Zelve, where the rock dwellings are particularly closely packed, and where an optimistic movie director was vainly trying to shoo the tourists away so he could shoot a scene involving Mongol hordes. Next we came to the great rock at Uchisar, towering grandly above the village with, amazingly, a cemetery on top. 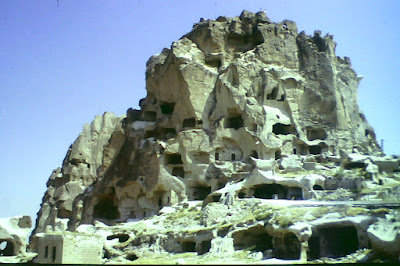 Greek Christians had lived in the area in large numbers. Their ancient churches survive, complete with murals of Christ and the saints going back to the 9th century, but nowadays they are without worshippers. After 1923 the Turkish leader Kemal Ataturk had had them all “sent back to their homeland”, as our guide put it. 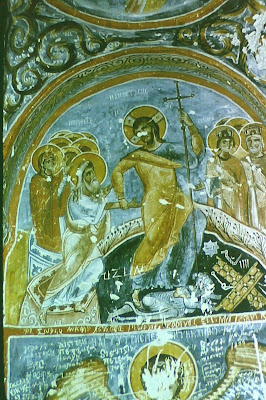 Since the Greeks had lived in the region since the time of Alexander the Great, whereas the Turks only appeared after the battle of Manzikert in 1071, I contemplated asking when the Turks would return to their homeland, which was in Central Asia - but I thought it best to remain silent: the Turks are still extremely sensitive to accusations of ethnic cleansing (especially in the case of the Armenians) 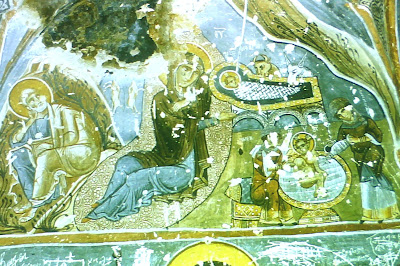 Finally we came to the “underground city” at Ozonak. Here a small gate in the hillside led to a maze of subterranean passages and rooms on several different levels, with much more still to be excavated and explored. There were huge millstones positioned at intervals, to be rolled across doorways in the event of an attack. The occasional ventilation holes were cunningly positioned and screened with piles of rock so as to be invisible from the surface. I was reminded of Tolkien: not so much of the Mines of Moria as of Bilbo lost in the goblin-tunnels beneath the Misty Mountains. It was not a place for the claustrophobic, or indeed for the very fat.

Postscript
In one odd way Turkey reminded me of my visits to the Soviet Union. Instead of finding statues of Lenin everywhere, there was an equal profusion of statues of Kemal Ataturk, and Ataturk’s tomb in Ankara was far more massive and elaborate than Lenin’s in Moscow. Ataturk was also highly successful in crushing Islamic fundamentalism in Turkey. With reference to this, I once asked a professor, an expert in 20th century history, why he thought Ataturk succeeded where the Shah of Iran failed. He came back with a counter-question: why had Ataturk succeeded where Lenin had failed. I thought this was a most interesting notion.
Posted by Peter G. Shilston at 14:23