The building of Ludlow castle in Shropshire began in 1085, within 20 years of the Norman Conquest. It occupies a strong strategic site, with steep cliffs on three sides, overlooking the River Teme westwards into Wales. 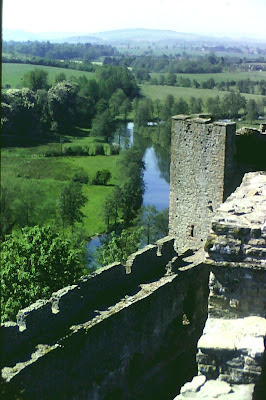 It consists of an inner and an outer Bailey, separated by a dry moat.
The picture below shows the entrance to the inner Bailey. The large building in the centre was originally the Gatehouse, which was later strengthened to form a Keep. The present entrance and the buildings to the right of it were extensively altered in Tudor times, as can be seen from the large square windows. 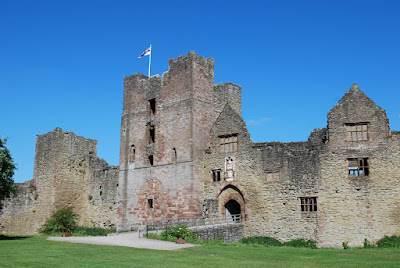 For centuries, central Wales was a "wild west", where the English kings exercised little or no authority. The local nobles on the English side, known as the "Marcher Lords", were given extraordinary powers to maintain law and order, but this in turn made them very hard to control. The most famous of the Marcher Lords was Roger Mortimer (1287-1330), the owner of Ludlow and other castles in the region. In 1327 he overthrew and murdered King Edward II (in a particularly gruesome way, according to legend), and then ruled England alongside his lover, Queen Isabella (known as "the she-wolf of France"), until he was in his turn captured and executed as a traitor by the new King, Edward III.
The Yorkist and Tudor monarchs established the Council of the Marches of Wales, based in Ludlow castle, with special powers to govern the region. The Council was often under the nominal leadership of the Prince of Wales, or some other member of the royal family, to give it prestige and authority.
The picture below is a view down from the Keep into the inner Bailey. It shows the most unusual round Chapel, and behind it the Great Hall (with the ramp leading up to it) and the buildings which housed the lawyers and senior officials of the Council. Inventories of the time show that the rooms were furnished with great luxury. (The scaffolding outside the hall is to support a stage. Every summer a Shakespeare play is produced in the castle, with well-known professional actors) 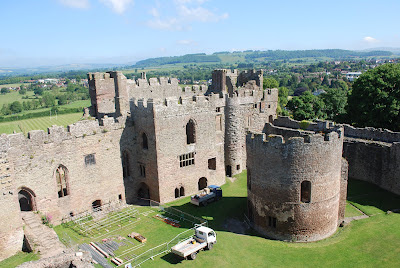 Ludlow castle featured several times in the history of England. In 1459, early in the Wars of the Roses, Richard, Duke of York, was surprised in Ludlow by Lancastrian troops and forced to flee. The victorious soldiers then plundered the town. In December 1501 Arthur, Prince of Wales, came to live in Ludlow castle as the representative of his father, Henry VII. Arthur brought with him his new Spanish bride, Catherine of Aragon; but in April 1502 he died, at the age of just 16, and his heart was buried in the parish church. Since the king wanted to maintain the link with Spain, it was arranged that Catherine should then marry Arthur's younger brother, who in 1509 succeeded to the throne as Henry VIII. Such a marriage arrangement was highly irregular, and permission from the Pope had to be secured. But when after twenty years of marriage Catherine had failed to produce a son, Henry VIII came to feel that the whole process had been illegal and sought an annulment - with revolutionary consequences for the English church and crown when the Pope refused to help.
In 1646 Ludlow, the last Royalist base in Shropshire, surrendered to Parliamentary forces without a shot being fired. Cromwell then abolished the Council, and over the next century and a half the castle was left uninhabited and gradually fell into decay.
Posted by Peter G. Shilston at 14:19