Cock-up at Belzec death camp: How not to impress the inspectors!

Belzec, near Lvov in Poland, was one of the principal Nazi death camps. It began to operate in March 1942,  using carbon monoxide from a diesel engine to gas Polish Jews. Compared with Auschwitz it is little known, for the simple reason that there were hardly any survivors. The commandant was Christian Wirth (nicknamed "the savage Christian"), who had formerly worked on the "T4" programme for gassing the mentally ill. The camp was under the ultimate authority of Otto Globocnik, the S.S. commander in south-east Poland.

In May and June 1942 thousands of Jews were murdered in Belzec, but Wirth soon realised that the gas chambers were inadequate for the magnitude of the task, and so he had six replacements built. The new centre was a concrete building with a flat roof, labelled "Bathing and inhilation rooms", and camouflaged from the air with netting and tree branches.Victims entered the gas chambers from a corridor, but there were also doors opening to the outside, to facilitate the removal of bodies by the Sonderkommandos: Jews whose lives were spared for the time being, doing the dirty work. The diesel engine was housed in a separate shed. At its peak, Belzec could process fifteen thousand victims a day. By the end of 1942, almost half a million Jews had perished in Belzec; almost all of them from Poland.

There are hardly any known survivors of Belzec, though one Sonderkommando Jew lived to tell the tale. Chaim Hirzman from Zaklikow was selected for his gruesome task "because he had a military bearing". He described the shaving of the hair of victims, the public hanging of would-be escapees, and on one occasion the burial alive of a group of tiny children. The guards were generally mindlessly brutal, but on Sundays they relaxed by playing football with the Sonderkommando men, and even on occasion allowed them to win!

Kurt Gerstein, an S.S. man who committed suicide in 1945, left a description of Belzec from when he attended Otto Globocnik on a visit to the camp in August 1942. They saw over 6,000 Jews, including many children, brought by train from Lvov. Ukrainian guards drove them out, and removed the bodies of more than 1,400 who had died during the voyage. The Jews were made to hand over their clothes and spectacles, had their hair cut off, and were forced naked into the gas chambers: seven to eight hundred people crammed into ninety square metres. But then, as as is all too common with demonstrations laid on for distinguished visitors, things went horribly wrong. The diesel engine refused to start. For two and three quarter hours the mechanics tinkered unavailingly with it, while a furious and doubtless highly embarrassed Christian Wirth struck out at the Ukrainian helpers with his whip. Through a glass porthole the trapped Jews could be observed weeping as they waited for death. Apparently no-one considered letting them out. When the engine eventually got going, the monoxide took a further half hour to kill them all. A Sonderkommando of other Jews then dragged out the bodies, removed any gold from the teeth, and dumped them in a mass grave where they were left to rot. Globocnik told Gerstein that the whole operation was top secret, and anyone gossiping about it would be shot. He was dissatisfied with the efficiency of the system, which is scarcely surprising under the circumstances, and recommended cyanide gas as an alternative; but Wirth felt his personal pride was at stake, and rejected this advice.

Globocnik claimed that Hitler himself had visited the site and praised his conduct of the operation, but there is no other evidence to support this claim. It is probably just as well that Hitler did not come: heaven knows what cock-ups the German version of Murphy's Law would have had in store for an inspection by the Fuhrer! 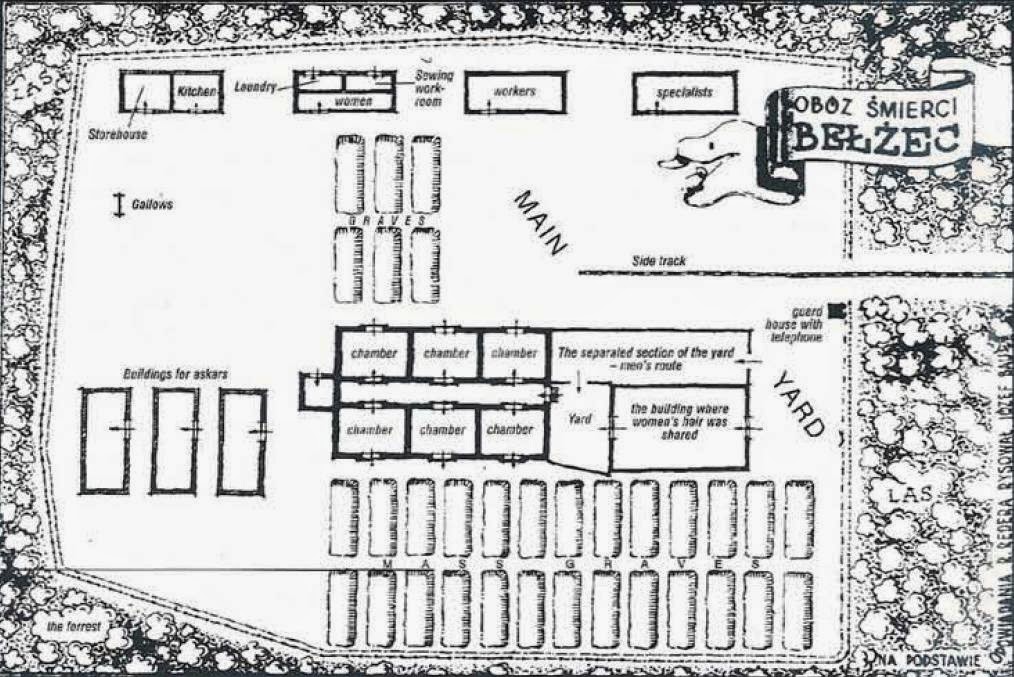 Postscript.
Some years ago I taught a Polish student who had come to Britain for his "A" levels. I asked him what he had been told back home about the fact that all the Nazi death camps (Chelmno, Belzec, Sobibor, Treblinka, Auschwitz and Majdanek) were in Poland. "Nothing!" he said firmly. I'm still wondering what to make of this.
Posted by Peter G. Shilston at 08:35