The Emperor Tiberius on Capri

Tiberius (born 42 BC, reigned 14-37 AD) was the second Roman Emperor, in succession to his stepfather, Augustus. He was not originally intended as the heir. He was kept busy on imperial duties from 20 BC, and showed talent as a soldier and administrator. In 6 BC, being fed up or merely tired, he withdrew to the island of Rhodes for several years to study with the Greek philosophers; but was recalled to Rome when the deaths of Augustus's grandsons left the succession open. In his early years as Emperor he showed republican traits, scornfully rebuffing any obsequiousness or flattery, but he seemed to find personal relationships difficult, and he was never popular.
In 26 AD he withdrew again, this time to Capri. From there he continued to conduct the bureaucratic side of governing the empire, but he never returned to Rome. In his absence the city fell under the control of two ambitious police chiefs: Sejanus and then Macro, who conducted brutal purges of the senatorial aristocracy; whether on Tiberius's direct orders is not clear. After his death at the age of 79 the imperial title passed to his young great- nephew, Gaius Caligula, whose behaviour soon proved to be insane.
At some stage, either during Tiberius's lifetime or later, stories began to circulate about grotesque orgies being held on Capri, involving the aged Emperor and swarms of very young children. It was also said that anyone who angered him was flung over the cliffs. It is obviously impossible today to assess the truth of such stories, but Tiberius's critics ever since have gleefully combined them with the cruelty of his police chiefs to paint a picture of the Emperor's all-round wickedness.

The Villa Jovis was just one of many residences that Tiberius built for himself on Capri. It occupied a spectacular site on the extreme north-east tip of the island, looking precipitously down to the sea. It is quite a slog climbing up to it from the town below in the heat of summer, but well worth the effort.
In amongst the text are some pictures I took, showing the huge extent of the Villa Jovis, and the amazing views. 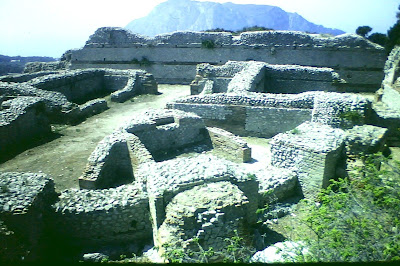 Tiberius's reputation for wickedness derives from the writings of the two great Roman historians Tacitus (born 55 AD) and Suetonius (born 69 AD). Now it is immediately obvious from these dates that neither man could have spoken to many people with direct personal knowledge of Tiberius; and the more contemporary sources which survive are much less critical of the Emperor. Yet Tacitus assails him in the first six books of the "Annals", stressing his cruelty, his morbidly suspicious nature and the immorality of his personal life. Why Tacitus chose to do this is unclear: modern historians tend to think that his description of Tiberius is actually a coded attack on Domitian (reigned 81-96 AD), a tyrant-emperor from Tacitus's own day. 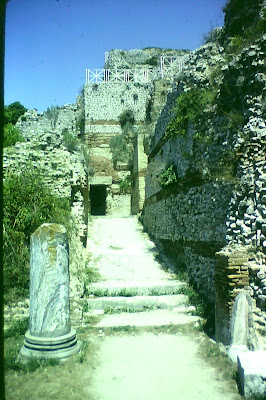 As for Suetonius, his book "The Twelve Caesars", though a splendidly entertaining read, is best seen as an early exercise in sensational tabloid journalism (in the case of Tiberius, "Paedo Emperor in Capri child abuse horror!"), and the sources for his salacious anecdotes are not known. 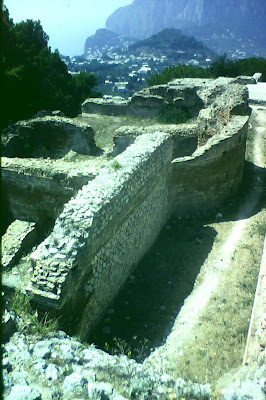 Modern readers know Tiberius mostly from Robert Graves's historical novel "I, Claudius", and from the TV series it engendered in the 1980s. The stories which Graves relates with such relish mostly come from Suetonius. Tiberius is portrayed as a flawed yet tragic personality, always conscious that the imperial family used his services but did not like him, and with his personal happiness ruined when Augustus forced him, for political reasons, to divorce his beloved wife Vipsania. The tangled and incestuous family tree of the Caesars was such that Julia, whom he was now ordered to marry, was simultaneously his sister-by-adoption and his step-mother-in-law! The two of them did not get well. One would have thought that all this, together with the later death of his son (possibly murdered; according to the scandal-mongers, no member of the imperial family ever died a natural death!) would have been enough to make anyone embittered! 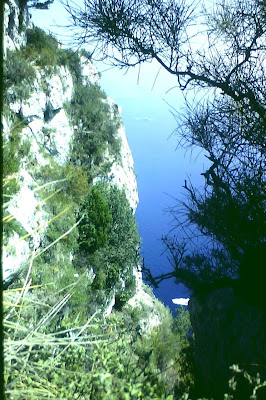 Also worth a trek on Capri, though it is on the opposite end of the island from the Villa Jovis, is the Villa San Michele, created by the Swedish-born doctor Alex Munthe. It is celebrated in his entertaining but grossly sentimental autobiography "The Story of San Michele"; a world-wide best-seller ever since its publication more than eighty years ago. On the very first pages, Munthe discovers that Tiberius still has an unsavoury reputation on Capri, when he stumbles over a chunk of marble from one of the ancient villas and a peasant girl exclaims, "Timberio camorrista!" - "Timberio" being the local dialect version of the emperor's name, and "camorrista" referring to the Camorra, the much-feared Neapolitan equivalent of the Mafia (still very active today!); the implication being that Tiberius lived on in folk-memory as a thoroughly evil man. But later on, Munthe comes to sympathize with the grim old emperor, conscientiously carrying out his administrative duties into extreme old age, yet resentfully aware that no-one appreciated his work but that everybody hated him.
We know of politicians with that problem today; though hopefully they do not seek relief from the stresses of office in the same way as is alleged against the Emperor Tiberius!