John Benbow was born in March 1653 at Coton Hill in Shropshire, a village which is now a suburb of Shrewsbury. His father, who seems to have been a tanner, died when he was still young.
Benbow joined the navy at the age of 25. In those days, the navy was one of the few institutions in which a man from humble origins could rise to a position of wealth and importance; especially when there was fighting to be done, which was the case during his career.

He quickly saw action in the Mediterranean in 1678-81, when Admiral Herbert led attacks on the corsairs operating out of the ports on the coast of Algeria: the notorious "Barbary Shore". These corsairs were a serious threat: they had in the past raided as far as Cornwall, and kidnapped whole villages to sell as slaves. The campaign was successful, but disputes over prize-money led to Benbow transferring to the merchant service for the next few years. But the "Glorious Revolution" of 1688-9, which brought William of Orange to the throne, quickly led to war with France, and he returned to the Royal Navy. He was appointed captain of HMS "Sovereign",and later promoted to Rear-Admiral, and then to Vice-Admiral. He took part in the naval battles at Beachy Head, Barfleur and La Hogue, and in raids on St. Malo, Dunkirk and Calais; and his courage and tactical skill were noted and admired. It was in this war that the British navy established a supremacy over the French which was never subsequently lost.

When peace was eventually signed, Benbow was sent to American waters, to protect trading vessels against piracy. But within a few years, it became clear that hostilities with France were about to resume. This would become known to history as the War of the Spanish Succession, and may justifiably be considered as the first-ever world war, with fighting not only in Europe but also across the Atlantic. In 1702, in anticipation of this, King William dispatched Benbow in command of a small fleet to the West Indies. There in mid-August he fought a running battle of several days against a French squadron under Admiral Jean du Casse. But some of Benbow's captains, led by Richard Kirkby, apparently refused to follow orders, and the action proved indecisive. The British ships which did go into combat were outnumbered, and some sustained heavy damage. Benbow's leg was shattered by chain-shot. He was determined to continue the fight, but to his fury Kirkby and other captains refused. The squadron had to return to Jamaica, where Benbow ordered the arrest of the captains, branding them cowards and traitors.

In a development which seems extraordinary nowadays, Benbow received a letter from du Casse, acknowledging that Benbow ought to have won the battle, adding, "As for those cowardly captains who deserted you, hang them up, for by God they deserve it". Was this a case of a chivalrous relationship between commanders, or was du Casse simply trying to stir up trouble?

Benbow died of his wounds in Jamaica on November 4th. His tombstone, with an appropriate inscription, is in St. Andrew's church, Kingston. Captains Kirkby and Wade were tried by court-martial for cowardice and disobedience of orders, and condemned to death. They were shot on board HMS "Bristol" in Plymouth on April 16th 1703. Others of Benbow's captains were also convicted, but were later pardoned.

Benbow quickly became a popular hero. One would have thought that a commander who could not persuade his subordinates to follow orders had failed in the most fundamental way, but it was Benbow's final disaster rather than his earlier successes which inspired the balladeer:-

-  and so on for several more verses.

Those who know that great classic adventure story "Treasure Island" may recall that the first chapter opens with Billy Bones, First Mate to the legendary pirate Captain Flint, turning up at the inn called the "Admiral Benbow" and living in fear of encountering a mysterious seafaring man who has lost a leg (Long John Silver, of course!)

Benbow remains well-known in his native Shrewsbury, with a memorial tablet in the church of St. Mary the Virgin 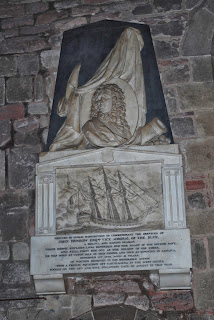 and a pub named after him (though I don't think he would have worn this kind of wig). 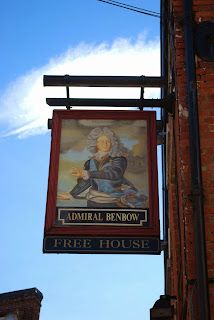 There has been a move to erect a statue of him in the town, though so far without result.
Posted by Peter G. Shilston at 02:19