In 1984 I went on a trip to the Soviet Union, which as well as taking us to Moscow and Leningrad also included crossing the Caucasus mountains down to Georgia, Azerbaijan and Armenia. I have written a full account of the trip on an earlier blog entry, and I want to focus here on just one aspect.

In Yerevan, the capital of Armenia, I had my first and only experience of observing an actual Third World slum. We were amazed to find that our hotel, which was a very large new building, backed onto a slum; a revolting area of little cabins made of bits of board and corrugated iron, packed together all higgledy-piggledy and housing several hundred people. There were television aerials and even a few cars amidst the squalor, but I also saw large rats foraging in broad daylight.

These are a couple of photos I took from the hotel, one being the view from my room. 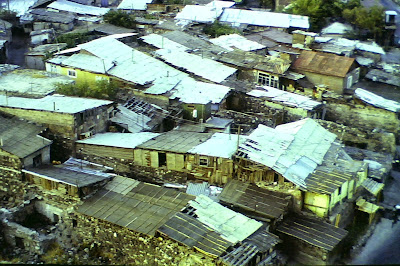 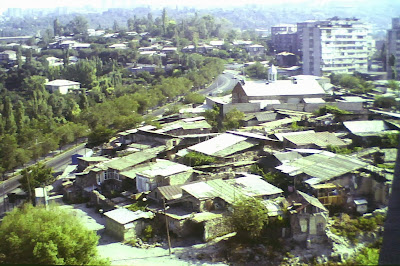 Apart from the slums, there were few old buildings in Yerevan. The pride of the city was clearly the new football stadium just down the road from our hotel: the home of Yerevan Ararat, one of the best teams in the USSR.
It was the sight of the slums in Yerevan which sparked off the most discussion in our party. The whole lot could have been cleared away for the cost of building our hotel, and the new football stadium must have cost millions. So why were the slums still there? Of course, it is likely that before the war Yerevan was ALL slum, and that the rehousing done so far was actually an impressive achievement. I suspected there just weren’t enough civil engineers in the Soviet Union assigned to such projects. The building sites we saw in the other trans-Caucasian cities, Tbilisi and Baku, were primitive operations which would have horrified any British bricklayer. There were no wheelbarrows on site, the scaffolding looked most unsafe, and some of the ladders were just bits of wood nailed together. We were all surprised that the authorities had given so little thought as to what the tourists would make of the squalor staring them in the face.

I was saddened how fast the tourists fell into an entirely patronising attitude towards the slum-dwellers, on the general theme of, “Well, we wouldn’t like to live there, but the people seem happy enough, and they probably prefer it to living in blocks of flats”. (this view, interestingly enough, was expressed in these very words by an East German.) Judging by the extreme grottiness of the flats we saw under construction, I could understand people not wanting to live in them, but those slums were a plain and simple health hazard, and should have gone long ago. Besides, refraining from demolishing slums on the grounds that the inhabitants still want to live in them was hardly the approach one would expect from the Soviet planning authorities! I was more convinced than ever that the Soviet Union was a very inefficiently run country, still escaping from ancestral poverty and backwardness, and that trying to conceal this not-too-disgraceful fact was the cause of a great deal of pretense and dishonesty. Long before the end of the tour, we were starting to laugh at the latest display of incompetence, though a French lady in the group kept exclaiming “Oh! What a country!” in a tone of despair.

The Soviet Union disintegrated six years after our visit. Perhaps our experiences should have led us to anticipate this, but we proved no more prescient than the professional commentators. Whether the collapse of the U.S.S.R. really benefited the Caucasus and Trans-Caucasus might be questioned, because there has been endemic warfare there ever since. Whether the Yerevan slums are still there, I do not know.
Posted by Peter G. Shilston at 01:01